By Jeremy McCarthy on January 11, 2011 in Facts of Life, Fitness and Exercise, Mind-Body 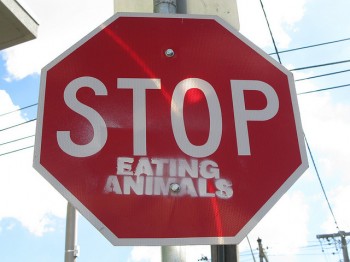 I recently wrote “Confessions of a Carnivore,” about my month-long stint last August in vegetarianism.  To motivate me during the month, I read “Eating Animals” by Jonathan Safran Froer, which gives a “too close for comfort” look at how our food is produced in the modern world.  Reading this book is like taking the red pill in the Matrix:

Morpheus:  This is your last chance.  After this, there is no turning back.  You take the blue pill—the story ends, you wake up in your bed and believe whatever you want to believe.  You take the red pill—you stay in Wonderland and I show you how deep the rabbit-hole goes.

–courtesy of imdb, The Matrix

Just like Neo in the Matrix, readers of “Eating Animals” have their illusions shattered as they realize we are all plugged into a bizarre and incredibly inhumane system without our consent or even our awareness.  Although in the Matrix, it is human beings that are being farmed for their energy, in the true version, humans are the aggressors, raising and slaughtering other creatures to serve our own energy needs.  Just like the Hollywood version, these poor creatures grow up, live, and die in this system without ever knowing of the real life that could exist beyond the walls of their factory farm.  (Note:  After I wrote this I found I wasn’t the only one to make this comparison to the Matrix.  Check out “The Meatrix” http://www.themeatrix.com/.)

One (of many) shocking thoughts that occurred to me as I read “Eating Animals” is how hidden and inaccessible information about our food supply is.  Although we demand transparency in government, in budgets, in business, and in healthcare, we don’t seem to want to pry into the nature of modern food production.  We have adopted a kind of “don’t ask don’t tell” stance, probably because somewhere, deep down, we know that the way our food is handled is not right, but we would rather not disrupt the system (or our illusion of it) that keeps us fed (fat, happy and blissfully ignorant.)

We should demand transparency, just as we do in other domains.  “Transparency is crucial,” says one “locavore” blogger, “Evil things happen when people believe no one is looking.”  We should ask questions about where our food is coming from.  And we should be asking ourselves if this is the kind of society we want to live in—the kind of reality we want to create.

I am hopeful that there does seem to be some growing awareness of these kinds of issues—thanks, in part, to books like “Eating Animals.”  Other books, such as The Omnivore’s Dilemma and In Defense of Food: An Eater’s Manifesto, both by Michael Pollan show us that real food is exceedingly hard to find in our society.  The movie “Food, Inc.” by Eric Schlosser who also wrote “Fast Food Nation,” shows the true costs of our convenient fast food lifestyle.

But even if people become more aware of these issues, and a global discussion ensues, these problems are not easy to solve.  More of the world’s population moving into the modern era means more people following the American trends of overconsumption.  There is not likely to be a humane and sustainable solution that will allow the world’s population to consume the quantities of meat being eaten today in the United States.

The only hope is a cultural shift towards a more vegetarian diet, exceedingly difficult in a culture as meat-centric as ours.  Restaurants serve predominantly meat-laden dishes in excessive portions.  And the sheer size of the meat-eating population allows corporations to create delicious and inexpensive meat dishes with nary a vegetable on the menu.

Inspired by the book, and by Graham Hill of Treehugger introducing the idea of “weekday vegetarianism” at a recent TED conference, I started my own part-time vegetarian diet.  Here are the rules:  1. I can eat meat at only one breakfast, one lunch and one dinner each week.  2. Leftovers count as one of my meals.  3. Free meals don’t count. 4. Traveling doesn’t count.  5. Breaking an occasional rule, doesn’t mean I’ve fallen off the wagon.

The second rule prevents me from cheating by ordering “too much” during my one meal of the week. The third rule is meant to ease the pain of special events: dinner parties, family picnics, summer barbecues, etc.  Nobody should be forced to eat coleslaw on a hot dog bun at a summer barbecue or nibble on a salad at a wedding while the person to their left has the filet mignon and to their right the lobster.  The fourth rule allows me to enjoy the local delicacies wherever I might be and prevents me from adding additional stress to the already challenging aspects of eating well while traveling.  And the fifth rule reminds me that even though I break an occasional rule, I am still better off following the plan than slipping back to my previous full-time carnivore ways.

This is similar to the weekday vegetarian version, but in this version you can pick and choose which meal you want to have your meat.  This diet still allows a carnivore (like myself) to enjoy his or her favorite meat meals.  In fact, reducing the commonness of eating meat means you can anticipate and savor those meals even more, and perhaps even pause for a moment to contemplate the sacrifice that an animal (or animals) had to make to provide for you.  If everyone would instantly adopt this diet, a massive burden on the planet would be lifted and we would have the breathing room to examine more ethical and healthy food options.

I have already copped to the weak-willed yearnings of my inner carnivore.  So will I succeed at this diet?  I’m not sure.  I’ve been on it since September, but I just took Christmas to New Years off (a liberal interpretation of Rule 5 that I allowed myself for the holidays.  Whether I succeed or not, I believe it is important for people to examine their relationship with the planet, and test the boundaries of their will.  If you would like to participate in the experiment, you don’t need to follow my rules.  Make up some of your own, and let’s compare notes.

Open Your Mind with Open Monitoring Meditation
The Happiness Diet: The Power of Positivity for Weight Loss

8 Responses to On Eating Animals