By Jeremy McCarthy on June 14, 2011 in Making a Better World, Positive Psychology, Wellbeing in the World of Work 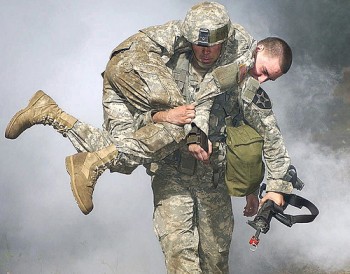 I previously wrote about the U.S. Army’s Comprehensive Soldier Fitness Program:  the army’s step towards developing a fighting force that is as psychologically strong as it is physically.  The program gets some heat from critics, for a variety of reasons, but I see it as a step towards taking better care of the men and women who are fighting for our country.  Ultimately, this is the largest workplace wellness intervention ever undertaken.  This is only appropriate considering the military is probably one of the most stressful work environments anyone could work in.

I recently learned more about the Comprehensive Soldier Fitness Program from reading Martin Seligman’s new book, “Flourish: A Visionary New Understanding of Happiness and Well-being.” (Seligman is one of the founders of Positive Psychology and was the vision behind the Army’s program for developing psychological resilience.)

I already knew about the Global Assessment Test designed to test a soldier’s psychological fitness and the resilience training being rolled out to 1.1 million soldiers via their drill sergeants.  But I didn’t know about the online training modules and the dream team of psychologists that are behind them.

Emotional Fitness was developed by Barbara Fredrickson, who has been described as the “genius of positive psychology” for her theories on the purpose of positive emotions.  Her research hypothesizes that positive emotions broaden our scope of attention opening us up to greater opportunities and helping us to learn and grow by developing cognitive, social and emotional resources.  Her work has focused on maintaining a positivity ratio (a healthy ratio of positive to negative emotions) that is essential to flourishing.

Family Fitness comes from the famous John and Julie Gottman, known for their “lessons from the love lab” where they have studied thousands of couples to identify the hidden elements that make relationships last (or not.)  John Gottman is known for his ability to predict divorce with greater than 90% accuracy after observing one brief interaction between a couple.  Surprisingly, a lot of the soldiers’ stress comes not from being shot at or from jumping out of airplanes, but from their relationships with their spouses and children.  Thanks to cellphone and internet technology, soldiers on deployment are more connected to their families than ever before and the issues in these relationships are at the forefront of their minds, even on the battlefield.

Social Fitness comes from neuroscientist, John Cacioppo, the world’s foremost expert on loneliness.  Cacioppo teaches that human survival is dependent on our ability to come together in groups.  Nowhere is this truer than in the military where soldiers literally risk their lives for their units.  This reminds me of the story from psychologist and strengths guru Chris Peterson, who was surprised when his research discovered “the capacity to love and be loved” as the highest strength in the U.S. Military Academy.  The officer assigned to assist him with his research replied, “What part of ‘band of brothers’ do you not understand?”

Spiritual Fitness comes from psychologist Ken Pargament, the author of “The Psychology of Religion and Coping.”  I often refer to Pargament’s work to help me develop a better understanding of the role of spirituality in the spa industry.   The spiritual fitness training for the military is intended to be neutral to any specific religious or secular belief frameworks but guides the soldiers in developing a moral compass by not only identifying their own beliefs and values but by relating to others whose beliefs and culture may be different.

The final module is on Post Traumatic Growth and was developed by Rick Tedeschi and Rich McNally (the only two on the roster that I have not personally met or learned from, although I have read some of Tedeschi’s articles on positive psychology and health and wrote about them last week on Positive Psychology News Daily.)  The idea of post traumatic growth is simple and powerful (and is the only required module out of the courses presented here.)

We have all become conditioned to worry about post traumatic stress (PTSD) in our returning warriors.  But as Seligman points out, most people who go through traumatic events aren’t crippled by the experience, they are strengthened by it.  Not only is PTSD not inevitable, it is not even likely.  This fact alone can help alleviate some of the psychological concerns that our soldiers are confronting.  The module also aims to help soldiers prepare for trauma so that when it occurs they are able to learn and grow from the experience.

I should clarify, that I am a pacifist.  I don’t believe in war as a solution to our problems and I wish we had no need for soldiers in our society.  But I’m excited about these programs because these soldiers are learning skills that I think everyone should learn.  The fact that they are being introduced to the army only makes it even better because, a. these programs will be tested and strengthened allowing us to learn even more about the psychology of resilience, and b. if we are asking our soldiers to lay their lives on the line for their country, we should take as good care of them as possible.

Business (and Psychology) Lessons from the CEO’s
Dissecting the Spirit in Body, Mind, Spirit