By Jeremy McCarthy on August 30, 2011 in Facts of Life, Positive Psychology 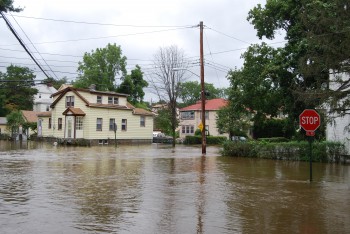 Hurricanes, tornadoes, earthquakes, tsunamis, fires, floods, volcanoes and terrorist attacks.  In just the past year these disasters have all hit somewhere in the world.  We’ve had every kind of disaster you can think of short of an attack of zombie hordes.  This time, the disaster came pretty close to home for me with Hurricane Irene sweeping along the entire Eastern Seaboard, and my small town of Mamaroneck, NY was one of many engulfed by the massive storm (see picture, taken down the street from my house.)

I was lucky.  My house is up on a hill, well above sea level.  The only tragedy I have to confront is the inconvenient loss of everything in my refrigerator and freezer (our power has been out for over 48 hours now.)  But all around me, in lower lying areas, people were not so lucky.  The combination of rainfall, high tide on the New England Sound and storm surge sent millions of gallons of water flowing through the streets and into peoples’ homes.

Of course it could have been much worse.  As of the last report I saw, Irene had only taken 35 lives on its rampage up the coast.  This is nowhere near the magnitude of tragedy that occurred on September 11 (next week I will write about that in honor of the ten year anniversary coming up,) and it pales in comparison to the devastating earthquakes in Japan experienced earlier this year where some 18,000 people lost their lives.

But as I sit, hunkered down with only the glow of my laptop and a few candles to illuminate my living room, I can’t help but ponder the aftermath of some of the horrific recent tragedies.  What good is positive psychology when disaster strikes?

Positive psychology is not only the science of happiness, but the science of the best things about life and people.  Sometimes, it is the worst possible times that bring out the best (or when we truly need to be at our best.)  This is by no means a comprehensive list, but here are a few things from the study of positive psychology that can be useful in times of trauma:

1.  Resilience.  People are more resilient than we often realize.  Marty Seligman, the founder of positive psychology says that while we hear a lot about post traumatic stress, reactions to stress are actually normally distributed.  Meaning a small percentage of people experience post traumatic stress, most people bounce back from trauma and return to their baseline levels of wellbeing, and a small percentage of people actually grow stronger as a result of the trauma (post traumatic growth.)  Based on this idea, the U.S. Army has been rolling out resilience training to all 1.1 million of their soldiers (see my article on Comprehensive Soldier Fitness here.)

2. Meaning.  During times of intense trauma and tragedy it can be difficult to find meaning in the situation.  The wrath (and the randomness) of Mother Nature, in particular, can seem particularly cruel and without reason.  Dr. Paul Wong, an expert on meaning in positive psychology has developed tools to help people find the therapeutic benefits of connecting to meaning, including this 12-step guide created for survivors of the Asian tsunami.   A sense of meaning and purpose is one of the foundations of psychological wellbeing.

3. Leadership.  After September 11, the Center for Positive Organizational Scholarship published a series of essays on “Leadership for Trying Times.”  Articles describe a variety of strengths and virtues that are important in times of crisis, including compassion, hope, courage, forgiveness and creativity.

4.  Creativity.  Steve Dahlberg from the International Centre for Creativity and Imagination wrote this piece on the power of creativity after Hurricane Katrina.  “Creative Problem Solving” is an important strength for people to use to see a way out of the current situation and to imagine a brighter future.

5.  Hope and optimism.   People who do well in traumatic situations are those who are able to stay in tune to a more positive future and to see the positive in spite of the tragedy.  Victor Frankl, for example, found a sense of meaning and purpose during his time in a concentration camp.  He described “Tragic Optimism” as the ability to remain hopeful in tragedy by working towards future goals.  Marcello Spinello (Psychology of Wellbeing guest blogger and mindfulness expert) gave me a great quote from Mr. Rogers (from the famously positive children’s television show.)  “When I was a boy and I would see scary things in the news, my mother would say to me, ‘Look for the helpers. You will always find people who are helping.’”

This week, in the aftermath of Hurricane Irene, I already ran into one of the helpers.  Jim Killoran, from Habitat for Humanity, who somehow seems to know (and be loved by) almost everyone in Westchester County, was down at the flood zone recruiting volunteers in preparation for rebuilding and cleanup.  He was exhibiting all of the virtues on the list above.  It’s amazing how one man, armed with compassion, hope and leadership, can create community in the wake of disaster.

bouncing back from disaster, positive psychology in times of crisis, recovery from trauma

Love or Science? A Young Woman’s Dilemma
My Memory of September 11

8 Responses to When Disaster Strikes