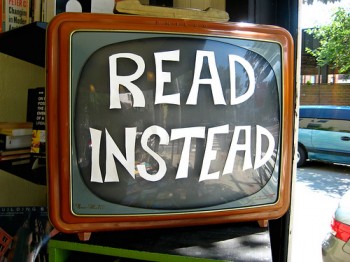 Television is awesome.  Compared to fifty years ago, there is such a diversity of programming that there is literally something on TV to appeal to just about everyone at almost every hour of the day.  Not only does it serve as the perfect “idiot box,” the place to tune out the mind after a busy day at the office, but the programming has gotten more clever, with shows that engage the mind, challenging it with mysteries to solve and complex story lines that leave us wondering “how’s it going to end?”

The world of reality television has also grown exponentially.  Like a peephole into the lives of complete strangers, reality TV gives us the cathartic effect of watching the drama that others are facing in their own lives (like watching just how desperate “Housewives” really are.)

But reality TV also teaches us about passion for work, while watching how vehemently Gordon Ramsay vexes over the quality of a risotto, or watching Dog the Bounty Hunter infuse love into his job, tracking down wayward delinquents.  Reality television takes us to vicarious emotional highs as a former nobody becomes the next big music sensation on American Idol, America’s Got Talent, or The X Factor.  Sometimes we get to see a dowdy housewife or a cellphone salesman become a huge star literally overnight.

The problem with television is no longer how bad it is, but how good it has become.  So good, in fact, that the average American now watches about 30 hours of TV each week for a grand total of 250 billion hours each year in the U.S.  The important question to ask is not how good television is, but is it better than the other things we could be doing with this time?

Joe is always asking me for samples of spa music that I get through my work in the spa industry.  He comes home from work, puts on some soothing music and works on his house by the beach, which he designed and decorated himself.  Sometimes he reads a book.  Often he has friends over, grilling on the deck, or playing board games inside.  (By the way, Joe also invented a board game, it’s called “Quick Chess” and it’s the best gift for an adolescent who might want to learn the game of chess!)

Reading, relaxing, working on a home, listening to music, visiting with friends: Joe has a great life.  But who has time to do all of this when the Bachelor is down to his last few roses and the latest train wreck is about to begin on the next episode of The Jersey Shore?

Television watching is a habit.  And the cost of that habit is the time it robs from other aspects of our lives.  What else could you do with 3-4 hours a night?  Could you write a book?  Start a blog?  Learn a language or a musical instrument?  Find peace through a meditation practice or yoga?  Lose 30 pounds?  What would your relationships be like if you tuned into them like you do to the television?

Television is getting better and better.  We no longer have to flip through channels of drivel in an unfulfilled quest for entertainment.  We can choose the shows we want, watch them when we want, and fast forward through the commercials.  But before you run to the boob tube you have to ask, what else is there?   Opportunity cost is the cost of your next best alternative.  An alternative that is lost as soon as you turn on the TV.  Try tuning in to something different, and let me know what you think.

Are You Afraid of the Pain?
An Angel and a Hero: Courage Personified

8 Responses to The Opportunity Cost of Television