By Jeremy McCarthy on January 29, 2013 in Book Reviews, Facts of Life, Positive Psychology Some of those who work in positive psychology were surprised by a recent research study by Roy Baumeister showing that stress and anxiety was linked to less happiness but more meaningfulness in life.  Why would a meaningful life be more stressful and less happy?  Aren’t we always reading about how having a sense of purpose and meaning contributes to a happier life?  Isn’t meaning important?

I could at this point, as I often do on this blog, talk about “false dichotomies.” I could argue, as many often do, that meaning and happiness go hand in hand.  You do not have to choose one or the other.  You can have it all!

But I think what we are seeing here is actually a true dichotomy.  We all arrive at forks in the road where happiness lies down one branch and meaning is down the other.  Sometimes we do have to make a choice. 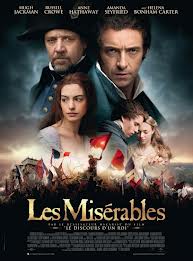 I was thinking about this the other night while watching the new film version of Les Misérables.  Les Misérables has long been one of my favorite stories and the musical soundtrack is easily one of the most listened to albums I have ever owned (Back in the day, I played the cassettes to death in my car on long drives and eventually had to repurchase the 2-CD set.)

I fell in love with Jean Valjean, the main character, from the very beginning of the story as he is completing his grueling 19 years of prison for stealing a loaf of bread in order to save his sister’s child.  A meaningful choice to be sure, but certainly not a happy one.

(Spoiler alert: If you haven’t seen or read any version of Les Miz, stop reading this article and run, don’t walk to get the book or see the movie.  If you don’t mind hearing some of the details, read on . . .)

Again and again in the movie (or book, or play) the characters have to confront decisions for meaning or happiness.  And again and again, they choose meaning—exactly what makes the story so profoundly moving and inspiring:

The Bishop gives away his fine silver to save the soul of a poor wretch.  Fantine becomes a prostitute to raise money for her sick daughter.  Jean Valjean turns himself in to the authorities to save an innocent who would take his place.  Eponine takes a bullet for someone she loves.  Marius forsakes love and personal happiness to fight for a cause in the French revolution (“Who cares about your lonely soul/we strive towards a larger goal/our little lives don’t count at all.”)  In the same revolution, countless young men give their lives while fighting for their freedom.

It would be difficult to identify any character in the story that did not sacrifice their personal happiness in pursuit of some meaningful goal.  (But what do you expect from a movie called “Les Misérables?”)

At the end of the movie, Valjean is again called upon to decide between meaning and happiness.  He rescues young Marius and brings him home, knowing that Marius will take away his beloved Cosette, the girl that he raised as his own.

Obviously, these are examples from a fictional account, and you could find countless more fictional examples that tell this same story.  But you can probably also find examples in your own life—times when you took on extra stress and sorrow to do something that you believed was important.

Maybe, as in the case of Les Misérables, these meaningful examples involve sacrificing your own happiness for that of someone else; someone that you love or someone that is needier than you.

Jean Valjean ends the movie (double spoiler alert!) suffering from a broken heart for having to leave behind his beloved Cosette.  But there is no question that his life was a meaningful one and Cosette and Marius’ happy existence lives on as proof of that.

Like many meaningful lives, Jean Valjean’s redemption from suffering comes only with the evaluation of his life once it is over; with the knowledge of a love so deep that it came with great sacrifice.  “To love another person is to see the face of God.”

I think Baumeister’s research shows an important aspect of life.  The meaningful life and the happy life do not always go hand in hand.  Holistic health expert Dr. Daniel Friedland puts it simply: “sometimes you have to choose between what feels good and what feels right.”  What would you choose?

While Les Misérables is not a happy story, it does fill us with inspiration.  We come away not feeling happy, but questioning what we believe in, what are we willing to suffer for, and what kind of person do we really want to be.

All good questions for those who want to live a meaningful life.

The facebook page for The Psychology of Wellbeing now has over 1,000 likes!  Please join us there!