By Jeremy McCarthy on June 11, 2013 in Book Reviews, Facts of Life, Positive Psychology 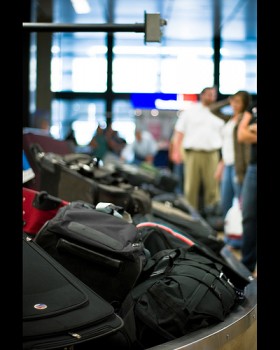 I have a pet peeve when I travel:  It really bugs me how people insist on crowding around the baggage claim to wait for their bags. If everyone would simply stand back about 5 or 6 feet from the carousel, it would be so much easier for everyone to see the bags going by, and to easily retrieve their bag without having to navigate around their fellow passengers.

I recently took a course on “Irrational Behavior,” taught by renown behavioral economist, Dan Ariely, who uses the concept of “inflation” to describe how this kind of behavior can evolve.  An example Ariely uses (as related to him by his economist grandfather) is what happens in a small concert arena:  When the people in the first row of a concert stand up, then the second row is forced to stand up, and then the third and so on.  Soon, everyone is standing. Everyone has relatively the same view, but now everyone is a lot less comfortable.  As Ariely says, “When everybody just worries about their own relative position, there’s a chance for destroying the whole eco-system.” (from his video lecture 1.4, 12:00).

The baggage carousel elicits a similar kind of “inflation” in that the first people to arrive feel free to scoot right up to the edge, which forces the later passengers to also crowd in beside them until everyone is packed around the edge making it difficult for everyone to find and retrieve their bags.

I have observed this phenomenon in hundreds of airports around the world, leading me to believe that this is a pervasive challenge that extends across borders and cultures.

The problem is that people are not thinking in a collectivist/collaborative mindset as they arrive to the carousel. They are thinking competitively, with each one wanting to be the first to get his or her bag. In The Darwin Economy, by economist Bob Frank (as cited in Ariely’s video lecture 1.4, 10:30), he describes how lion seals, while competing to be larger than their competition, all become morbidly overweight. Ariely explains it as “a race to the top that is perfectly sensible for each lion seal . . . but nevertheless it’s destructive for the whole environment.” (11:10). 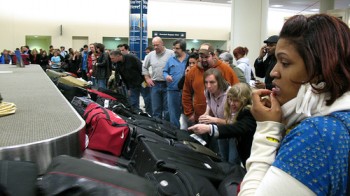 Ariely would likely describe this behavior as “herding,” like how people tend to go to restaurants where other patrons are present, or research participants will ignore a potentially dangerous fire if they see that their cohorts are not reacting.  Airline passengers simply “follow the crowd” to the carousel without fully considering the options of how best to approach it.

In Ariely’s course, he gives several strategies for dealing with irrational behavior.  Here are a few options that could be applied to the problem of the carousel:

Unfortunately, no airport has asked me (or Ariely for that matter) to solve their baggage carousel problem, so I will likely have to suffer my pet peeve a bit more (while modeling appropriate behavior 5 feet behind the crowds at the carousel.)

When you consider an example like this, you realize that irrational behavior is all around us, and sometimes it is engendered or fostered by the simple systems that have evolved in our society.  Simple solutions are readily available if only we dig in to the work of behavioral economics.

Busting The Minimalist Workout Myth
The Psychology of Management

7 Responses to Irrational Behavior at the Baggage Carousel