By Jeremy McCarthy on October 17, 2013 in Facts of Life, Making a Better World 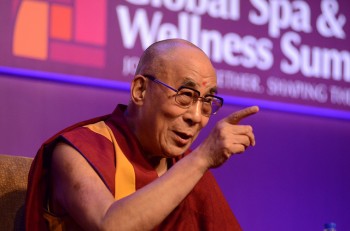 I recently had the opportunity to see His Holiness the Dalai Lama speak as our keynote speaker at the Global Spa & Wellness Summit that took place in New Delhi just over a week ago.  To be completely honest, I wasn’t very excited about seeing the Dalai Lama.  People who know me are surprised by this given my interests in mindfulness, wellbeing and spirituality.  But the reality is, I have seen videos of his talks before and read a few of his books and I knew that his message would be fairly simple.  I did not expect to take much away.

In spite of my skepticism, it is true what people say about the Dalai Lama: being in his presence is quite a different experience.  It is not so much what he has to say about things like mindfulness, compassion, or non-violence, although these things are all important.  It is really more about how he exudes it through his own countenance and manner of interacting with his audience.

In the case of the Dalai Lama, the man is the message.  Through direct eye contact, a warm smile and an easy laugh, he has a way of making everyone in the room feel like he is personally connected to them.  His sense of humor, humility, authenticity, kindness and mindfulness all came beaming through.  (If he was offering a course on public speaking, I would have signed up on the spot.)  He also was gracious enough to linger long after his allotted time answering our questions, and yet he still left us all wanting more.

And of course his messages are fairly simple, but perhaps because I was sitting in front of him, entranced by his warm smile and his kind eyes, they hit home.  And while this may be difficult to translate into a written blog post, here are some of the key pearls of wisdom that I took away:

The Rise of Wellness Tourism
The Compassionate Diet

2 Responses to Wisdom from the Dalai Lama