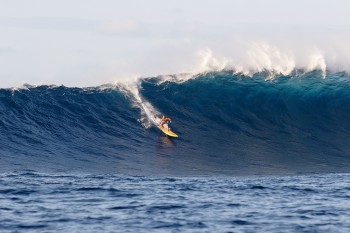 Laird Hamilton is a superman. I don’t just mean that in the sense of being my hero (although he is that.) I mean that he has superhuman capabilities, can do things that other people can’t, and is able to survive things that would kill most of us mere mortals. On a surfboard, he is faster than a speeding bullet, more powerful than a locomotive, and is able to surf waves that are bigger than tall buildings.

Laird Hamilton is just one example of a new breed of superhumans Steven Kotler highlights in his book, The Rise of Superman. The league of daredevil heroes also includes Felix Baumgartner, who transfixed the world by skydiving to earth from space, blowing all other skydiving records out of the water; Travis Rice and Jeremy Jones who took free mountain snowboarding to a whole new level, taking on the most rugged and sinister terrains in Alaska; or Shane McConkey who invented “billy goating” when a skier “hops and pops” to find the patches of snow to ski down a treacherously rocky mountain.

According to Kotler, these modern supermen developed their superhuman prowess by “flow-hacking,” literally reprogramming the way their mind and body work together. We’ve all experienced flow, those moments when we become immersed in a challenge, our skills click into place, and we lose all sense of self and time. But while most of us find flow in a hobby, on a tennis court, or playing a musical instrument, these athletes do it while defying death at over 100 miles an hour.

But such is the power of flow. When you achieve a flow state, it is like bypassing your prefrontal cortex so your body can respond to miniscule changes in the environment faster than the speed of thought. When we tap into flow, we are not only fast and efficient, but we feel really good. Flow is the key to the “near-exponential growth in ultimate human performance” that we have seen from super-athletes like Laird Hamilton.

For extreme athletes, flow is far more than a warm, fuzzy feeling they get from practicing the sports they love. It is a matter of life or death. “In situations where the slightest error could be fatal,” said Kotler, “then perfection is the only choice—and flow is the only guarantee of perfection . . . flow is the only way to survive in the fluid, life-threatening conditions of big waves, big rivers, and big mountains.” As Danny Way, the skateboarder who took a death-defying ramp jump over the Great Wall of China, said, “It’s either find the zone or suffer the consequences—there’s no other choice available.”

Because these athletes take flow to such extremes, they show us what is possible. And because we live in a world where such performances are broadcast over the internet, the bar is always being set higher and new records are regularly broken.

Take Tony Hawk for example, widely known as one of the greatest skateboarders of all time and the first skateboarder to successfully complete a “900,” two and a half rotations in the air. It took Hawk 13 years of attempts before he finally pulled it off. Since Hawk’s accomplishment, a dozen other skateboarders have managed to hit the move, including a 12 year old Tom Schaar who then went on to do a 1080 (three rotations, watch the video.) Just after reading Kotler’s book, I saw a story about Asher Bradshaw, who just made a 900 at ten years old. What will this generation do when they hit their peak? 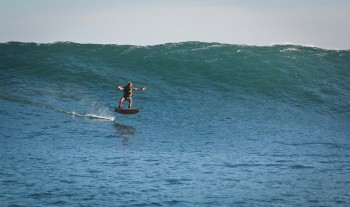 This is why The Rise of Superman is such an appropriate title for Kotler’s book. Extreme sports is creating a new breed of athletes that are “hacking flow” to develop super human capabilities. But those new skills don’t just pop up in isolated individuals, they set new frontiers, raising the bar on what humans are capable of (see “How the Internet is Making Us Stronger, Faster and Fitter.”)

For contemporaries of Laird Hamilton, all we can do is watch in awe, dumbfounded by his accomplishments. But thanks to Laird and other extreme sports athletes, a new generation is growing up in the world with an expanded perception of what is possible, and a growing body of knowledge on how to use flow to get there.

Talking to Kids During Tough Times
On the Evolution of Assholes

2 Responses to Superman is Among Us