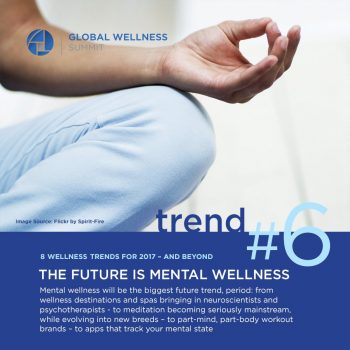 I had the breath knocked out of me last year when I was surprised with an award at the Global Wellness Summit in Tyrol, Austria. I was given the “Debra Simon Award” recognizing a “Leader in Furthering Mental Wellness.” The award was a touching recognition of my contribution to the industry and even more importantly, a strong indicator of how far we have come in the past decade.

It was almost a decade ago when I first began speaking about the importance of psychology to the spa and wellness communities. At the time, spas identified themselves as “places devoted to overall well-being through a variety of professional services that encourage the renewal of mind, body and spirit.” (ISPA.) But I think most spas were failing to live up to this definition. While we were promoting this idea of holistic mind/body/spirit wellness, most spas were marketing themselves around the purely physical aspects of the experience: the scope of their facilities, the techniques of their therapists, the ingredients of their products, etc.

When I went back to school in 2008 to pursue my Master of Applied Positive Psychology, the number one question that people in the industry asked me was, “Oh, are you leaving the spa industry?” Isn’t it curious that we claimed to be offering mind, body and spirit well-being, but we didn’t think that the scientific study of mental well-being was relevant to our industry?

Well, boy have things changed. Today, the study of psychology is not seen as extracurricular to the spa and wellness world, but a core part of what we do. At industry conferences today, psychology is the headliner. And the Global Wellness Summit has been leading the way with last year’s summit featuring a broad range of experts and discussion topics about aspects of psychological well-being including “mental toughness,” “mental detox,” and “the neuroscience of beauty.” This year’s event appears to go even further into these topics with the theme “Living a Well Life,” a new initiative on “Mental Wellness,” and a “historic lineup of experts” on the “science of happiness.”

It is clear that the Global Wellness Summit takes psychological well-being very seriously. Not only did they establish the honorary award for leaders in furthering mental wellness, but they have formed a new committee working on mental wellness initiatives, and have announced “mental wellness” as one of their top trends for 2017. Susie Ellis, the organizer of the Summit, said this year’s award was recognizing me for being one of the first voices in our industry to talk about the importance of psychological well-being. I certainly didn’t create the trend towards mental wellness—it is simply an idea whose time has come—but I appreciate the recognition for promoting something that I still believe is so important to human wellbeing.

What made the award even more moving was to hear the story of Debra Simon, Susie’s friend in whose name the award is endowed. Most in the industry won’t know who Debra Simon was, but a brief video at the summit, narrated by Debra’s daughter told her powerful story. 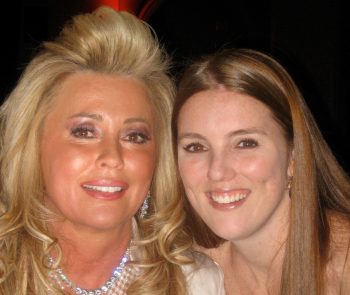 Debra lived an amazing life, raised a beautiful family and had deep friendships. But as is too often the case, life had something else in store. Tragedy began to strike. She had a painful and grueling divorce, which ultimately brought her to financial ruin, and then her youngest son received a life-changing and debilitating traumatic brain injury.

It was one blow after another and Debra felt that she couldn’t take anymore. She felt like she was in “the final round of a boxing match, and simply could not get up anymore.” On September 9, 2009, she took her own life.

Debra’s story reminds us that we are all vulnerable. The winds of fate are fickle. We never know which way they will blow.

During her life, Debra Simon always tried to help those around her. But she never got the help that she needed herself, and eventually, her hope ran out. I asked Debra’s daughter, Lauren, what she thought the wellness industry should learn from her mother’s story. “Embrace people with kindness and fill them with hope,” she said. “You never know the battles they are facing.”