By Jeremy McCarthy on March 16, 2018 in Facts of Life, Making a Better World 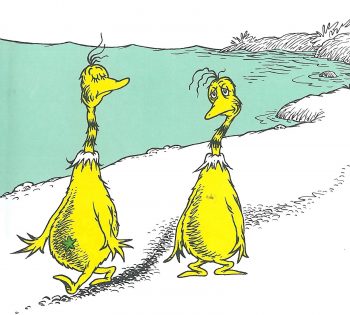 But then a stranger comes into town, Sylvester McMonkey McBean with a contraption to put stars on the bellies of the Plain-Belly Sneetches. Problem solved, right? Not so fast! Once all the Plain-Belly Sneetches had stars, the Star-Belly Sneetches felt like they needed to do something different to differentiate themselves, so they all had their stars removed. The society began to swing back and forth from putting stars on to taking them off until they were a mix of both again (right back where they started, except no one could remember “whether this one was that one or that one was this one. Or which one was what one or what one was who.”)

This story is usually used as a parable to teach the woes of discriminating against people for superficial reasons, but there is another lesson to be drawn here. Societies don’t tend to become homogenous, they tend to stabilize around an ideal level of diversity. If you push too far in one direction the scales will tip back the other way so that the point of stability is always achieved.

In the Selfish Gene, Richard Dawkins describes this as “an Evolutionarily Stable Strategy.” In any community where you have some “Hawks” (aggressive and ready to fight to resolve their problems) and some “Doves” (more collaborative and more likely to retreat if things get violent) the community will eventually stabilize to a set ratio of Hawks vs. Doves.

Why does this happen? Because when there are too many Hawks they become more likely to fight with one another and a small handful of Doves will begin to thrive and multiply by staying out of the fray. But if there are too many Doves, a small handful of Hawks can quickly take power by asserting themselves forcefully, stifling the Doves and increasing the ranks of the Hawks. Invariably, a stable ratio is ultimately found (usually with more Hawks than Doves, BTW.)

In other words, the gun control debate is as futile as the fight over stars on the beaches of the Sneetches. By all means, advocate for the policies that you would like to see–that is how a democracy works. But realize you may only be able to tip the scales so far before it swings back in the other direction. The Hawks will never convince all the Doves that their way is right and the Doves will never convince all the Hawks that their way is right. We are just going to have to learn to live with each other in spite of our differences . . . just like the Sneetches.

Yoga on a Plane: Moving in a Sedentary World
Do Digital Detoxes Really Work?

One Response to Why The Gun Debate Will Never Be Resolved