By Jeremy McCarthy on April 5, 2011 in Mind-Body, Psychology of Spas and Wellbeing, Questions of Science

I was recently invited to speak at a symposium on “Redefining the American Spa Experience” for the Washington Spa Alliance, an impressive group of spa and wellness professionals in our nation’s capital.  The theme of the day seemed to be exploring the relationship that spas have with science.  I tried to contribute to the dialogue by discussing science and spirituality in the world of spas.  Today’s article comes from the notes from my talk. 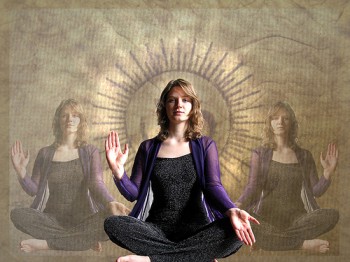 Science and spirituality.  These are two ideas that seem to live at opposite ends of the spectrum.  All of us in the spa industry have to find our places on this continuum, with medical spas on the scientific side all the way to meditation retreats and ashrams on the spiritual end of the spectrum.

The trend in the spa industry seems to be about moving spas away from spirituality and more towards the scientific end of the spectrum.  Susie Ellis, President of SpaFinder, identified this move towards science in her Top 10 Global Spa Trends for 2011.

From my observations, Susie has captured this trend correctly.  A recent article in Spa Business Magazine, had a panel of doctors all explaining how spas need to become more scientific so they can form a closer partnership with the healthcare industry.  And the messages that I hear from spa industry professionals seem to confirm this trend:

“spas should be more about wellness and less about pampering.”

“spa treatments should be covered by insurance.”

“spas should be more evidence based” / “more research should be done on spa treatments.”

The problem I have with these messages is that they are based on fear.  We live in a difficult economy and so we are afraid that if we do not do something to make our offering more relevant or more scientifically validated, we will be viewed as nothing more than a luxury indulgence, and the consumers will simply take their dollars somewhere else.

These are valid fears, and the spa industry should take them seriously, but I’m not so sure that getting more scientific is the right answer.  There are already plenty of entities in our society competing on the scientific end of the health care spectrum.   Spas should focus on doing what they do best, which is treating people holistically across mind, body, spirit.  Spas should be more spiritual, not more scientific.

I don’t like, for example, the idea that spas should be less about pampering and more about wellness.  On the contrary, I think pampering is an essential part of what it is to be a spa (see my article “In Defense of Pampering.”)  Rather than removing pampering from the spa experience, I wonder why I can’t get pampered when I go to a doctor’s office or a hospital.  Why are spas the only healing institution that we look forward to going to?  The philosophy of the spa world is that feeling good and being well are related.  That is our strength and we should capitalize on it not abandon it.

I also don’t agree that spa services should be covered by insurance, even though it would probably be an economic benefit to the industry.  The insurance companies are the reason that there is no pampering to be found in our other healing institutions.  The doctor does not have time to spend with patients because the insurance companies are paying the bill, and they decide the best ways your medical dollar should be spent.  From my experiences of dealing with insurance companies, it is the exact antithesis of the healing, nurturing treatment you would expect from a spa.

Luckily for the spa industry, there is also a trend to give consumers more responsibility in managing their own health care.  That being said, we do have to prove our efficacy to the consumer so that when they are choosing where to spend their health care dollars, the spa seems like a worthwhile choice.

And that brings me to the third message:  “spas should do more research and be more evidence based.”  I agree we should be more evidence based, and we should question the efficacy of our treatments with scientific inquiry, but we also need to recognize the limitations of science.  Research, for example, is contingent on controlling for the placebo effect and we should recognize that spas are designed to maximize the placebo effect.  Some people in the industry will be offended by me saying this, because of the stigma of a placebo as a “null treatment.”  But I define the placebo effect as “the body’s ability to self-heal,” and I think spas are places that people can go to heal themselves.

I like this definition of the placebo effect from Sara Firman’s wonderful  Vision Spa Retreat blog:

. . . the placebo effect is actually the untamed (and untamable) spirit of healing.  It is the healing that cannot be explained by current science and is therefore assumed to be anomalous.  It is the miracle that medicine cannot see because it does not fit the model.

Another limitation of science is that most research is based on uncovering interventions that work across broad populations of people.  But it doesn’t really tell us much about what works for individuals.  Ellen Langer, psychology professor from Harvard University and the author of “Mindfulness” and “Counterclockwise,” talks about “the science of possibility” (or looking at what is possible in individuals.)  The extremes of possibility are considered statistical outliers and so are removed from most scientific research.  Science looks at what is common.  Spas may offer what is possible, as we hear in thousands of anecdotal stories of healing and transformation.

So how do spas move towards the spiritual?  The International Spa Association has defined spas as places that enhance wellbeing across body, mind and spirit.  But do we really live up to this definition, or even in the fu-fu-la-la, air fairy world of spas, do we find ourselves being focused primarily on the physical side of what we do?  We talk about the scope of our facilities, we talk about the techniques of our therapists, and we talk about the ingredients of our products.  So what are we really doing for the mind and the spirit?

I believe the spa experience is ultimately a psychological experience and a client loves or hates their visit to the spa, not because of the facilities, the products, or even the technical skill of their therapist, but simply because of how we made them feel.  Did we touch them on an emotional level?  Did we ease their anxiety?  Did we allow new insights or a fresh perspective to pop into their head?  Did we give them time for quiet reflection on their values and goals?  Did we give them an opportunity to connect with others?  Did we encourage them to take a step towards a healthier lifestyle?

The ironic twist is that these ideas of spirituality are not mutually exclusive with the ideas of science.  Science and spirituality seem to be moving closer together, not farther apart, as evidenced by a growing body of research that shows the importance of finding meaning in life, experiencing positive emotions, expressing love, hope, optimism and gratitude, and connecting with others.  Science is even getting more involved in issues of morality, kindness and altruism.

My favorite definition of spirituality comes from a scientist:  psychologist Kenneth Pargament, who wrote a book on the psychology of religion.  He defined spirituality as “the search for the sacred.”  For some people, “sacred” is a religious word and people use it to describe God, the bible, their church, their religion.  But there are other things that people hold sacred.  For some people time is sacred, silence is sacred, relationships with a loved one are sacred.  Spas and churches are the only two places in society where we are separated from technology and asked to come together and spend time in silence.

To be clear, spas should be more scientific, but in a holistic way.  We do not have to follow the medical model of the scientific method that looks at human health like a mechanic might look at automotive repair:  What parts need to be replaced?  What fluids need to be refilled?  What additives can we pour into the system to make it run better?

Human health is complex.  Wellbeing is determined not only by our physical condition, but by our relationships, how we think and feel, and what we believe.  Spas offer a place of healing in our society where that holistic nature is truly embraced and respected.

The medical health care establishment is already firmly covering the space for scientifically validated treatments in the physical realm.  But spas can own the holistic world.  If we use holistic science to create spas as spaces for people to self-heal, while experiencing emotion, meaning and connections, we offer something that the world really needs . . . and can’t get anywhere else.

Why Blogs are Better Than Research
Haptics: The New Science of Touch

19 Responses to Science and Spirituality in the Spa