By Jeremy McCarthy on November 5, 2016 in Facts of Life, Making a Better World 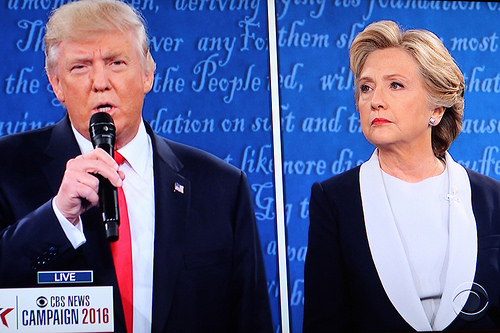 First, an issue arises. It could be gun violence, education, health care, religion, the environment, or the economy. But for the purposes of this discussion we will just call it “the Issue.”

The Issue is complex, making it difficult to say for sure what caused the Issue, what the implications of the Issue are, and what is the best way to address the Issue.  It would be nice to think that everyone would carefully analyze the Issue, consulting facts, research, and expert opinions before forming their own ideas, but unfortunately, this is not the case. Most people, upon learning of the Issue form their opinions not based on any rational understanding of the Issue, but rather on a gut instinct or “moral intuition” based on what feels right.

Only after they have gone with their gut instincts, do they begin to seek out facts and logic to help build a case for supporting their moral intuition. Psychologist Jonathan Haidt calls this, “the emotional dog wagging its rational tail.”

As many different ideas begin to coalesce around the Issue, there is a great deal of dialogue and debate. Unfortunately, all of this discussion does not lead to greater understanding because people are not really trying to understand the Issue, they are only trying to support their own moral intuitions. Humans tend to a show a “confirmation bias” meaning they are likely to interpret any new information that comes out in the course of the public discourse as evidence to support their existing position.

So society becomes somewhat divided into different camps of people who have different ideas about the Issue.

At first, this is not so bad, because most views are fairly moderate. Even though there is disagreement, most people recognize that the Issue is complex, and they can understand why other people have different ideas about how to handle it. But social psychology has found a tendency towards “group polarization.” Group interaction pushes people towards increasingly extreme views. As people practice more and more confirmation bias with others, they become more radical in their acceptance of certain ideas and their refutation of others.

For most of human history, this group polarization effect was not so impactful because humans lived in fairly small groups of mostly like-minded individuals. But in the modern age, thanks to technology, the group dialogue has become more diverse and the world has been divided into increasingly extreme ideologies.

In spite of this tendency towards more extreme views, there is still only a small minority of people that have aggressively radical ideas about the Issue. These ideas are so radical as to be almost ludicrous and they fly in the face of the “rational” discourse that is occurring among the majority of the population.

This is where the media comes in. Because it is no longer newsworthy to talk about the moderate debates around the Issue, the media seeks out increasingly shocking, disturbing or outlandish views about the Issue in an attempt to keep people tuned in to their platform. So while for most of human history this radical margin of the population (on either side of the Issue) would have been outcast and ostracized for their ridiculously extreme viewpoints, suddenly they have a voice.

As the media begins amplifying these most extreme, most disturbing, and least rational viewpoints about the Issue, the dynamic changes enormously. First, the moderate, rational viewpoints become drowned out by the more shocking and sensational extreme viewpoints that get more ratings with media outlets. This creates a huge incentive for people to become more extreme if they want to be heard.

This triggers another bias in human thinking, called the “availability heuristic.” This is a mental shortcut that humans use to determine the likelihood and importance of an event by how easy it is to recall an example of it. When bombarded with extreme views by the media, people naturally begin to assume that these voices are more important and more representative than they actually are. Both sides tend to assume that these extreme and irrational voices represent an entire political party, which gives further incentive for people to retreat further into their own extremes.

Humans also exhibit a “negativity bias,” or a tendency to be drawn towards more negative information. Not only does the media try to attract attention by covering the darkest, most frightening, and violent approaches to the Issue, but these are the stories that get read and shared as they trigger people’s fear instincts.

Perhaps the worst bias of them all is “self-righteousness,” the need to believe we are right and others are wrong. (You may be smiling and nodding as you read this article, assuming the biases I describe all fall on the other side. But no, I’m talking to you.) Ironically, the more certain people are of their positions, and the more vehement they are in defense of them, the more they should be questioning their own thinking. That feeling of “rightness” that we all have when debating complex Issues, is the first sign that we are failing to listen, failing to understand, and failing to think critically. Feeling “right” is a horrible gauge to judge our position because, “being wrong feels just like being right.” (Kathryn Schultz.)

So here we find ourselves, vociferously defending our viewpoints on issues that we don’t really understand, giving our attention to the most ridiculous voices of our times, and spiraling away from each other towards darker and darker extremes.

Unfortunately, it is far easier to see how we have arrived at this place than it is to find a way back. I don’t know what the solutions are but I think it will have to do with being more disciplined about where we give our attention, reserving it for the more moderate and rational voices among us and being aware of the cognitive biases that will try to lure our minds in other directions. In the age of social media, attention is our most powerful currency, and we have to stop giving it away to the worst voices in our society. The challenge is that this is not how we are wired. The allure of the demagogue is hard to resist. Our only hope is to value mindfulness and critical thinking enough that we can override our own programs to create a better, more unified world.

Prospection: Psychology Turns to the Future
The Law of Diminishing Returns, Applied

3 Responses to How Did We Get Here? The Extreme Polarization of American Politics