By Jeremy McCarthy on February 6, 2017 in Facts of Life, Making a Better World 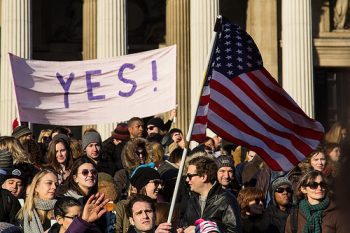 Remember when social media used to be fun? Facebook used to be a place to catch up with our friends, share cute pictures of our kids, and have a few good chuckles over cat videos. But those days seem to be over. Today, our social media platforms are filled with fear, anger, and insults as the conversation turns increasingly towards a subject that is often labeled taboo in polite conversation: politics.

The reason most etiquette guides suggest steering a way from discussing politics is readily evident in today’s social media forums: most people are ill-equipped to have such a conversation without it devolving into a shouting match. In this article, I talk about some of the mistakes I see people making and some suggestions for how we could improve our ability to speak rationally about politics.

A large majority of the political posts on social media (and in all media for that matter) are rife with logical fallacies. I won’t include an exhaustive list here, but here are three examples of some of the most common ones:

Conservative example: “If we let the liberals open our borders, our country will become infiltrated with terrorists or other people who don’t share our values.” (Most liberals are not suggesting to open the borders, they just may not agree with some of the policies that are proposed to keep them secure.)

Liberal example: “Trump wants to be a dictator. Look at the horrible things that other dictators have done and you can see how bad Trump is.” (Rather than specifically addressing Trump’s actions that are authoritarian or overstepping, a fallacious leap is made to comparing him to a dictator.)

A good practice for rational debate is to be sure that you have accurately captured the other side’s position before criticizing it.

Take care to not categorize a whole group by the actions of a few. Be wary of media stories that are designed to elicit these kinds of false conclusions.

Conservative example: “Obama refuses to say ‘radical Islamic terrorism.’ He must be blind to the risks of terrorism coming from the Muslim world.” (There are other reasonable diplomatic reasons for not wanting to label terrorist actions as being representative of Islam.)

Liberal example: “If you want to put restrictions on immigrants coming from Muslim countries, you must be a racist.” (There are other reasonable security reasons for wanting to restrict immigration from certain countries.)

Avoid simplifying arguments into “either-or” statements. Watch out for arguments that attempt to lure you into choosing one of only two possible positions. Allow for the broad range of possibilities that underlie most political issues.

It is important to have healthy discussion around the issues that are most important to us. The key is to find ways to express ourselves that are productive and allow us to find areas of mutual agreement.

If these ideas don’t work, we could also use more funny cat videos.

Bennet, B. (2013). Logically Fallacious: The ultimate collection of over 300 logical fallacies. eBookit.com.

The Joy of Work in the Age of Automation
Engineering Serendipity