By Jeremy McCarthy on August 13, 2013 in Facts of Life, Positive Psychology You may have heard of humorous stories of baby ducklings who follow around humans because they are genetically programmed to “imprint” on the first creature they see (presumably their mother, but not always–see cute duckling imprinting video here.)

Because of this interesting phenomena, the name “duckling effect” is sometimes used to describe when humans unwittingly follow other humans’ behaviors.  A well-known example of this “behavior contagion” is from the studies where students taking a survey do not react to smoke billowing into the room from under the door.  Because some of the participants were confederates of the experiment and had been instructed to continue completing the survey as if nothing was awry, the other students followed their behavior and decided not to react to the smoke either.  (See a video of this study here.) 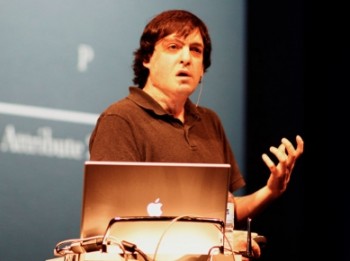 Psychology professor Dan Ariely shows another example when he replaces a lecture in his Behavioral Economics class with a bunch of gibberish from a random sentence generator.  He throws in a few keywords like “Adam Smith” and “capitalism” to give it some context, but otherwise what he says makes no sense.  He goes on for several minutes, but none of his students raise a hand or otherwise indicate that the lecture is nonsense.  Any student that looks around the room sees that no one else is making a fuss about it so they assume they are the only ones who are confused and they follow along.  (See the video here.)

This propensity of humans to follow along is an interesting trait, but even more interesting is how we apply this same “following” tendency to ourselves.  In other words, we tend to observe and follow our own behavior.

This, Ariely says, is a big problem with trusting our own intuition.  We think we are making rational decisions in our lives but his studies suggest that we are often just following in the footsteps of an earlier version of ourselves.  Once we have done something several times, we assume there is a reason for doing it and we adopt it as a part of our persona. This problem is exacerbated even more when you consider how easily we are influenced by our environment and the way decisions are presented to us.  Ariely, in his course on “Irrational Behavior” shows an example where he offers to read poetry for a group of his students.  Half the students are asked if they would pay $10 to listen to the poetry reading.  The other half is asked if they would accept $10 to listen.

Because of our self-following tendencies, this can have a massive impact on our lives.  The example Ariely uses is how we save for our retirement.  The way we set up our financial portfolio may have been massively influenced by how the options were initially presented.  After that, we tend to stay true to the path that was set, following ourselves and assuming that any decisions that we made previously must have been rational.

The first is to doubt your intuitions.  We are often oblivious to our own irrationalities.  We may think we are on the obviously correct path when in fact we have been funneled in that direction by external influences and our own mental biases.

The second way is to experiment.  Try new things.  Don’t assume that because you have had a latte from Starbucks every morning for the past five years that this is the best way to start your day.  Don’t assume that the investment strategy you set for yourself ten years ago is still what you should be following today.  Challenge yourself to break free from your past self and veer off in a new direction.

Dan Ariely has a free course on “A Beginner’s Guide to Irrational Thinking” offered through Duke University on Coursera.  I highly recommend it.

4 Responses to Following Yourself in the Wrong Direction