By Jeremy McCarthy on April 30, 2013 in Facts of Life, Fitness and Exercise, Making a Better World 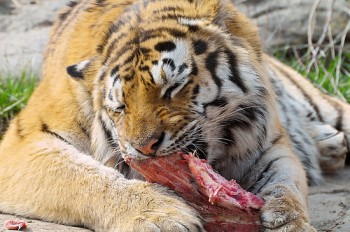 Photo Credit: Tambako the Jaguar via Compfightcc
Long-time loyal readers of this blog will be aware that I take a month off of eating meat every year.  I do this for three reasons: 1) I think it’s healthier not to eat meat.  2) I think it’s better for the planet. And 3) I think it’s a good to exercise your will from time to time to deny yourself things that you really want.  I’ve been doing this for over ten years.

Normally, I struggle through this month of vegetarianism and while I think it is good for me, I usually quickly rebound to my old carnivorous ways as soon as the month is over.  But this year, I tried something different.  I decided not to be so strict.  I would eat vegetarian whenever possible but I would allow myself a few exceptions:

Approaching my diet in this less rigid way probably means it was not as strong of a willpower exercise as it normally is.  After all, I was giving myself the ability to cave in pretty much any time I felt like it.  But I managed to stay pretty good about eating mostly vegetarian and I only “cheated” a couple times a week.

But here’s the thing.  Because I made my diet easier on myself, I didn’t bounce right back to carnivorism when the month ended.  In fact, I found I could continue my mostly vegetarian diet relatively easily.  Not only that, but as I continued through my second and then third month, I began to realize I was craving meat less and less.  And when I do eat meat, I haven’t been enjoying it as much. 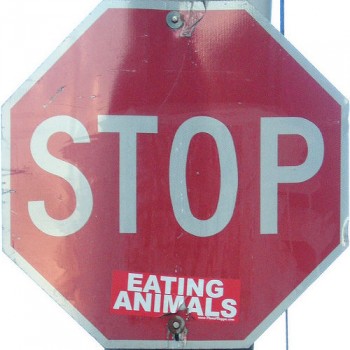 I recently saw an incredible lecture by Melanie Joy on “The Psychology of Eating Meat.”  I highly recommend it to anyone, especially if you are considering the role of animals in your diet.

In the lecture, she outlines different perspectives towards food, listing Veganism, Vegetarianism and what she calls “Carnism.”  She describes carnism as the opposite of veganism and a belief system characterized by denial about the realities of our food system.

But what I’m realizing is there is a HUGE gap between vegetarianism and carnism.  There is a lot of territory in between eating no animals (vegetarianism) and the typical American diet where meat makes up the lion’s share of every single meal.  As compelling as Dr. Joy’s presentation is, it is hard to get someone to go from the typical American “carnistic” (is that a word?) animal-centric diet to a vegetarian diet.

Why?  Not only do you have to overcome all of the culturally ingrained myths about the importance of meat in your diet (which Joy does a good job of covering in her lecture) but it is hard to be a vegetarian in a carnivorous world.  Restaurants, supermarkets and your own social circles are all conspired against you.

A much easier shift away from carnism would be to move to a “vegetarianish” diet.  The vegetarianish diet doesn’t mean you have to swear off meat altogether.  It means you don’t eat animals as the default.  You eat vegetarian most meals.  Save your meat for special occasions.  “Eat less and enjoy more” as some would say.

I still have not lapsed into full on veganism (I eat eggs and dairy.)  And I am not a complete vegetarian (I still have small portions of meat from time to time.)  But I’m vegetarianish.  And it feels like a step in the right direction.

Running with the Dead
Coca-Cola Really Does Sell Happiness

2 Responses to The Vegetarianish Diet