By Jeremy McCarthy on September 14, 2010 in Fitness and Exercise, Making a Better World, Mind-Body 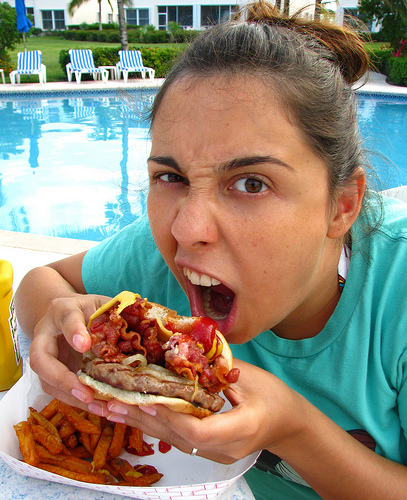 Although I have always wanted to be a vegetarian, I didn’t even dare try it until later in life.  I have always been active and athletic, and I assumed that vegetarians would not have the energy to exercise as much as I do, or to perform adequately in any kind of athletic endeavor.  My mind was changed about this when I met “Jimmy” the tennis pro at a resort I was working at in Mexico.  Jimmy was a strict vegetarian, as I could see by his choices at lunchtime.  But when he wasn’t at lunch, he was playing tennis for 7 hours a day, and seemed to have energy to spare.  Even after playing tennis all day, he could still run circles around the rest of us lethargic meat-eaters.  So much for that theory.

That was over ten years ago when I decided to try my first month away from meat.  Jimmy convinced me that I could get plenty of protein from non-animal sources and that I would get more than enough energy from a vegetarian diet—and he was right.  Not only did I have plenty of energy, but I felt fitter, and cleaner, and even lighter somehow.  On a vegetarian diet, the body seems to process foods better: you eat and thirty minutes later you poop.  And it’s a nice clean (if there is such a thing,) easy poop.  The ease of digestion may be one of the secrets as to why vegetarians have so much energy.

The only problem with the diet is . . . I would miss meat.  It is fun for a little while to experiment with different vegetarian dishes.  When cooking at home it is quite possible to get creative and come up with some delicious and filling vegetarian meals.  But when you go out to a restaurant with friends, it gets depressing.  Most restaurants offer just one token vegetarian entrée (if you’re lucky) .  And restaurant employees are poor at understanding the needs of vegetarians and offering or allowing acceptable substitutions (I think this is an area of huge opportunity in the restaurant industry that could be corrected with some simple staff training and awareness.)

So while I have continued to take a month off of meat every year (I’m in the middle of one now,) I watch the calendar carefully, yearning for the end of the month to come so I can break my fast with a juicy steak or some delicious fried bacon.  Many years, I purposely select February for my yearly fast, simply because the month would end a few days earlier.  But even though I am declaring myself a confirmed carnivore, there is a lot that I get out of these monthly tests of will.  I think it is good to take at least a month each year and clean out the digestive system with a low fat, high fiber diet.  I also think it is an important effort that I make to soften my footprint on the planet.  But perhaps most importantly, it is great mental and spiritual exercise to strengthen my willpower.

I think we will be seeing more and more of these kinds of partial vegetarian diets.  While we tend to think of vegetarianism in black and white terms (you are either a vegetarian or you are not,) the reality is there are ways for people to reduce their intake of animal meats while still honoring their inner carnivore.  Some people define “partial vegetarianism” as a diet that allows some fish and/or chicken while eliminating beef and pork which have the greatest negative consequences for health and planet.  But more and more people are talking about “part time vegetarianism” (a.k.a. “flexitarianism”) meaning you don’t have to quit meat “cold turkey,” just eat less of it.  Graham Hill of Treehugger introduced the idea of “weekday vegetarianism” at a recent TED conference.

Being a part time vegetarian, by taking a month, a week, or even day off of eating meat might not be as cool as being a full-time, card-carrying, vegan.   But if it allows you to improve your health, help save the planet, and exercise your willpower while still occasionally satisfying your craving for meat, this is a pretty good step to take.

10 Responses to Confessions of a Carnivore: Part-time Vegetarianism