By Jeremy McCarthy on December 19, 2013 in Fitness and Exercise, Mind-Body 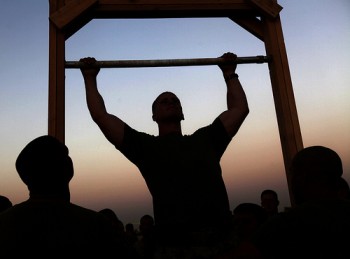 I was recently dealing with a nasty case of medial epicondylitis (otherwise known as “golfer’s elbow”) characterized by tender pain just inside my right elbow.  Those who know me are probably thinking, “but you don’t play golf!”  And they’re right.  I don’t.  But apparently you can get golfer’s elbow from doing too many pull-ups and since I was dabbling in Crossfit and trying to work towards my muscle-up, I overdid it a bit.

As a consequence, I have had to give up doing pull-ups and even stopped doing any kind of weight-lifting whatsoever (since picking up any heavy weight would only aggravate the injury.)  But even after several weeks of resting, I wasn’t seeing any improvement.  In fact, it seemed to only be getting worse.

So finally I did what anyone in a modern industrialized society would do when they have a medical problem that won’t go away:  I went to the doctor I asked my friends on facebook what I should do (:-)).  And I got lots of great advice from people who had dealt with chronic elbow pain previously.  Some of their suggestions were:

So, being desperate, I began to do most of these things.  I also (through more internet research) discovered a nifty video for a Thera-Band Flexbar that could be used to do therapeutic exercises beneficial for golfer’s and tennis elbow.  I ordered it immediately ($25).

Now I’ve been using it for the past two weeks and it seems to have really helped.  I’m not back to doing pull-ups yet, but my elbow pain has basically disappeared as long as I don’t push it too hard.  Now, if any of my facebook friends were to ask about how to treat golfer’s and tennis elbow, I would tell them to immediately go and buy the Thera-Band Flexbar because it has worked so well for me.

But here’s the funny thing (and finally we get to why any of this has anything to do with “The Psychology of Wellbeing.”)  The Flexbar might have had nothing to do with my recovery.  I was, after all, also doing a lot of other things on the list above (icing, ibuprofen, rest, massage, arnica.)  It was just the auspicious timing of the Flexbar usage that seemed to give me the feeling that “this really worked.”

Meanwhile, another one of my friends will swear by acupuncture and another one will swear by arnica and another will swear by massage.  The reality is that all of our elbow pain probably would have gone away anyway.  That’s what tennis elbow does (as long as you don’t keep aggravating it)—it gets better over time.  It’s called “regression to the mean”—statistically speaking, things are likely to move towards a more normal or common state.

But this is how people get so attached to “placebo” cures.  The brain looks for causation when there may be none.  This is why when you have a cold, everyone will immediately tell you exactly what you should do (eat soup, drink tea with lemon, take vitamin C, take Echinacea, etc.,) even though we all know full well that there is no scientifically validated cure for a cold.

When people think about placebo medicine, there seem to be two camps.  There are those who seem to embrace every bizarre new age cure that comes along from numerology to “manifesting”.  And there are others who pooh-pooh anything that has not been scientifically validated (see “What to do if your Doctor Sells Woo”.) 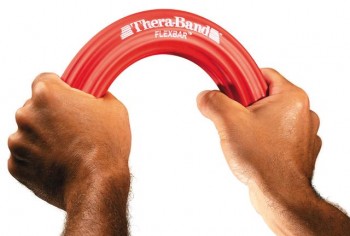 I fall somewhere in the middle.  The body often knows how to heal itself, but we all feel a need to play an active role in our healing.  And the body is better at healing itself when the mind believes it can.  If walking around the house squeezing a rubber bar eases some of the frustration and helpfulness I was feeling, and “fools” my body into recovery, I’m all for it.

So if you have tennis elbow or golfer’s elbow, I’d highly recommend the Thera-band Flexbar . . . it really works.

4 Responses to The Cure for Golfer’s Elbow