By Jeremy McCarthy on November 15, 2011 in Wellbeing in the World of Work

Last week, at the International Spa Association annual conference, the spa industry got a good immersion in what positive leadership looks like.  The first day’s keynote speaker was Bert Jacobs, the CEO (Chief Executive Optimist) of Life is Good.  In case you aren’t already familiar with the Life is Good brand, it is a clothing line that features “Jake” the smiling character with a short, optimistic message, “Life is Good.”

It sounds simple, but this is serious business.  Life is Good grew from zero to $3 million a year in their first 6 years.  And in the past decade, they have grown from $3 million to a whopping $100 million–a success story of massive proportions.  But if you ask Bert when he knew he was onto something big, he will tell you, “we knew within the first hour,” when they sold out of their first batch of 48 t-shirts in 45 minutes.

It wasn’t just that they sold so quickly (although that was true, too.)  What made them realize they were on to something huge was that their customers came from all walks of life.  They knew they had found a message that resonated with everyone.  In an age where contemporary wisdom encourages people to find their niche, and not try to please everyone, Life is Good bucked the trend and found that if they could sell optimism, everyone would want to buy some.

The third day’s keynote was Tony Hsieh, the CEO of Zappos who shared the success story of the online shoe retailer.  The original founder, Nick Swinmurn, started the company in 1999 after being frustrated that he couldn’t find a pair of brown Airwalks at the local mall.   Zappos has since become the world’s largest shoe retailer with revenues topping $1 billion dollars a year and was recently sold to Amazon in a stock trade worth $1.2 billion. 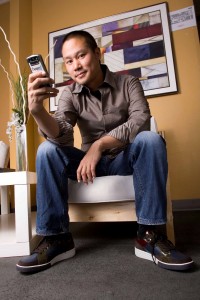 Jacobs and Hsieh are great examples of “positive leadership,” but not only because of the massive financial success that their companies have achieved.  According to Kim Cameron, a founder of the Center for Positive Organizational Scholarship, positive leadership is defined by three things:

But these two leaders also have achieved their success with an affirmative bias.  Jacobs’ entire business is based on optimism with a brand defined by simplicity, humility and a sense of humor.  His inspiration comes from his mother who used to ask her children at dinner “Tell me something good that happened today.”  He now sees optimism as a “self fulfilling prophecy.”

And Hsieh has become quite famous for applying positive psychology to the creation of his company culture, instilling core values into every aspect of their business and fostering an environment where strong personal connections are facilitated.

Both of these leaders also exhibit virtuousness through their work.  Tony Hsieh has been trying to turn Zappos into the best place to work in America (they are down to #6 so far.)  He is also sharing their secrets for a better corporate culture with the rest of the world, which means Hsieh has the potential to influence the wellbeing of almost everyone on the planet by changing the way the world works.  Zappos is now also giving back to their community with a new mission to revitalize downtown Las Vegas.

And Bert Jacobs has created the “Life is Good Playmakers Foundation,” which uses “the power of joyful play” to heal children who have confronted severe adversity through illness, violence or poverty.  He has learned, from working with children with terminal cancer, that those who face the most adversity are often the most likely to embrace optimism.

It was inspiring to hear from these two “positive leaders” at ISPA.  But I would be remiss if I did not mention one other exemplar of positive leadership who was also honored at the conference.  My dear friend Angela Courtright deservedly received the “Dedicated Contributor” award for all of her contributions to the industry.

Angela Courtright is well known in the spa industry for her successful Spa Gregorie’s day spa operations in Southern California and for her tireless service to the industry.  Her virtuousness also shines through in her spas’ ongoing efforts to raise money and awareness for the fight against cancer.  Congratulations Angela!  And thanks to all three of these positive leaders for inspiring us all to strive for greatness.

If you are interested in learning more about Positive Leadership in the Spa and Hospitality Industry, please join my free webinar this week or register for my upcoming course being offered online through UC Irvine Extension’s Spa and Hospitality Management Certificate program.

Lessons on Culture and Service from Zappos
Warning: Positivity May be Harmful