By Jeremy McCarthy on September 6, 2011 in Facts of Life 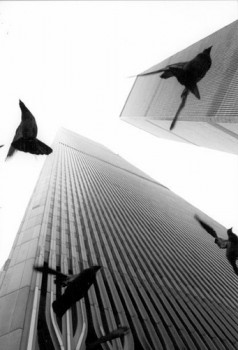 I was staying at the Pierre Hotel in New York City and woke up just as the first plane was crashing into the tower.  I was living in Mexico at the time but had stopped in New York on my way back from somewhere (my memories of whatever was happening the week before 9/11 were completely wiped out by the magnitude of the day’s events.)

I woke up in my hotel room and watched the events unfolding live on the morning news.  I can remember the shock of the second plane hitting the second tower.  Before that moment, no one was sure if this was an accident or an attack.  When the second plane hit, all doubts were removed.  I remember looking out the window of my room on the 37th floor of the Pierre and wondering how many planes were coming.  The shock and horror were magnified exponentially when the towers finally crumbled to the ground

I wanted to do what I could to help, and having had previous emergency medicine training, I headed down to the nearest hospital to volunteer in the emergency room.  The ER was incredibly crowded, not with patients, but with every doctor on duty, standing by and ready to help as the wounded poured in.  But there were no wounded to care for, no survivors to triage.  “Come back at midnight,” they told me.  You can help on the graveyard shift.

For the next two nights I helped people that were searching for their missing loved ones.  I had a desk, a phone, and a list of all the patients in every hospital in Manhattan.  The phone never stopped ringing with people looking for lost family members.  And no one ever gave me a name that was on one of those lists.

On September 12, a friend of mine and I took rollerblades and skated down to as close as we could get to Ground Zero.  I’ll never forget how surreal it was to rollerblade through Times Square.  There were no lights on in the usually iridescent town square and not a single car or taxi in the street.  I had never seen Manhattan like that before or since, except maybe in post-apocalyptic movie scenes, and I hope I never do again.

Getting close to Ground Zero, the streets were lined with crowds of people holding signs and cheering for rescue and clean-up crews that were coming in and out of the site.  We watched as they dragged demolished vehicles out of the site and trucks full of rescue workers from neighboring states came filing in.  It was the somberest of parades.

The official line in the days after the attacks were that no bodies were uncovered.  There were no deceased, only thousands of “missing” people.  But the most horrifying thing I saw at Ground Zero was a never ending stream of refrigerated trucks heading into the site.  Later that night at the hospital a coworker whose family owned a catering business would tell me that every refrigerated truck in New York, New Jersey and Connecticut had been called into the rescue operation.  No bodies my ass.

I consider myself a pacifist, but I remember the days, weeks and months after 9/11 were the first time I ever felt that we needed to go to war.  Someone needed to pay for what they had done.  I felt as though a spider had crawled into my bed at night and bit me on the face.  It would be hard to go back to sleep again until that spider had been caught and killed.

This year, ten years after the attacks, Osama Bin Laden was finally captured and killed.  Many people celebrated.  For me, there was no joy in this moment, only a sad reminder of innocent lives lost and of our own inability to resolve differences peacefully.  The senselessness of man’s inhumanity to man.

Looking back now, I think people needed that time in the days after 9/11 to search for their “missing” loved ones.  To process what was happening.  In the hospital at night people came in searching, and I looked up names on a list.  None of us were being particularly productive, but we all needed to do something.

My strongest memory from those graveyard hospital shifts is of a young woman who came into the hospital looking for her husband at around 2 a.m. She was wearing a sweatshirt with a picture of her two sons digitally printed on the front.  Mine was the third hospital she had been to, and I could tell she had many more on her list.  As soon as she walked in, I knew her husband’s name would not be on my list, but we practiced our ritual dance of helplessness.  I like to think I helped her to do what she needed to do in those moments.  Every year on September 11, I wonder how she is doing.

When Disaster Strikes
The Anatomy of a Career Path

8 Responses to My Memory of September 11