By Jeremy McCarthy on August 21, 2012 in Book Reviews, Positive Psychology 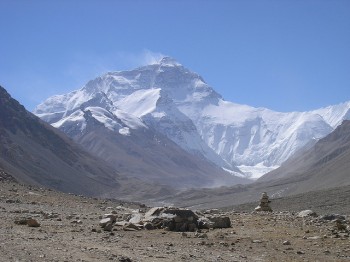 I have a confession to make:  I’ve never been a big believer in specific goals.  My “anti-goal” philosophy is not one I’ve shared on the blog previously, in part for fear of rejection or ridicule.  I mean, everyone knows how important goals are, and there’s tons of research on goal theory to prove it.  But I was coaxed out of my shell this week by Oliver Burkeman’s wonderful book, “The Antidote: Happiness for People Who Can’t Stand Positive Thinking.”  His book is about the “backwards approach” to happiness—that it is best achieved by NOT striving for it, and he devotes an entire chapter to the importance (or lack thereof) of goals.

Burkeman tells the story of Chris Kayes, a stockbroker and mountain climber, who happened to be hiking in Nepal at the foothills of Mount Everest when the famous tragedy that took 8 climbers’ lives (as outlined in “Into Thin Air”) was unfolding at the peak.

Kayes became fascinated with the psychology of the disaster that led these expert climbers to their death.  Interestingly, they were doing everything right from a goalsetting perspective:  they had a clear goal, and they were perseverant in their pursuit of it, but the results were disastrous.

According to Kayes, who now teaches management science at George Washington University, the same thing often happens in business: we become so identified with our goals, that the prospect of letting them go becomes unthinkable.  We ignore evidence that should be pulling us away from our goals, preferring instead to invest even more in them when things go wrong. 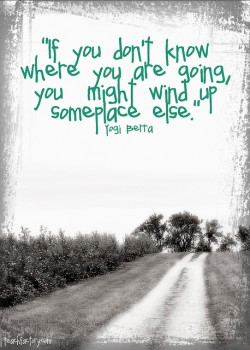 Where You're Going by Krissy Venosdale

Burkeman also cites researcher Lisa Ordonez, whose paper “Goals Gone Wild” challenged the existing goalsetting research that had already “achieve[d] the status of religious dogma” in the business world.  Ordonez found that goals led people to become single-minded in their pursuit, setting aside ethical principles and ignoring other opportunities that could lead them away from their goals.

To be clear, it’s not that goal setting doesn’t work.  Having a clear goal and giving it sufficient focus is likely to improve your chances of success.   But according to Ordonez, it is this same narrow focus that, while helpful for goal accomplishment, will open you up to the “harmful effects of goal setting.” The question is what are you giving up in return for achieving your goals?

Ordonez talks, for example, about how goals can kill intrinsic motivation.  I have seen many martial artists who lose their interest in training once they achieve their black belt.  Their training was always about the goal, and never became a part of who they were (see this article on “How a Black Belt can Hurt You.”)

Ordonez and Burkeman have reinforced my philosophy on goals.  It’s not that I don’t have goals, but they are more vague and directional (“to be a good father” or “to be successful at work”) than the specific and measurable goals that goal theory prescribes.  And when I do have specific goals, I hold them loosely, knowing that circumstances change, and goals should be continually reassessed.

For many years, for example, I studied martial arts, but rather than pursuing the common goal of achieving my black belt, I focused on being the best martial artist I could, at whatever level I found myself. 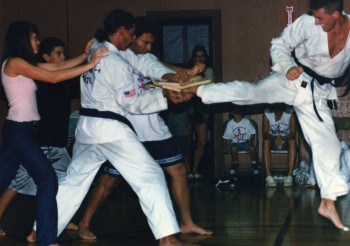 Breaking Boards (back in the day)

This strategy allowed me to be free from certain conventions.  I did not have to follow one particular path to becoming a martial artist, and over the years I studied many different styles (judo, aikido, muay thai, kung fu, karate, Brazilian jiu jitsu—much to the chagrin of some of my instructors who considered this kind of style-swapping to be disloyal.)  Along the way, I did get a black belt (two in fact: one in Hapkido and one in Tang Soo Do,) but that was beside the point.

Years later, being loosely attached to my goals also allowed me to leave martial arts.  I was living in a small fishing village in Mexico and driving an hour each way twice a week to train in Muay Thai with one of the national kickboxing champions.  One night I realized that I was spending too much of my time sparring with sweaty guys, and not nearly enough time with members of the opposite sex.  In that moment I decided to stop doing martial arts and to take up salsa dancing instead.  Looking back now, I’m not sure why it took me so long to realize that dancing with Mexican women a couple nights a week would be more fun than getting beat up by Mexican men.  I never went back to martial arts.

On Global Spa and Wellness Trends
Back to School: Studying on Purpose

21 Responses to Letting Go of Goals