By Jeremy McCarthy on May 29, 2012 in Book Reviews, Positive Psychology, Questions of Science 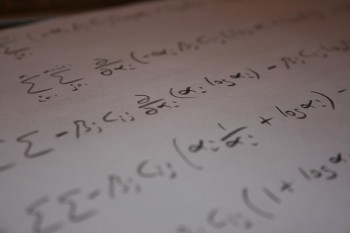 In Martin Seligman’s book, Authentic Happiness, he uses a simple equation to describe where happiness comes from:

Where “H is your enduring level of happiness, S is your set range, C is the circumstances of your life, and V represents factors under your voluntary control.”

I hear Seligman take a lot of flack for this equation in scientific circles.  There are those who think this is an oversimplification of how happiness works, and that describing it as a simple sum is faulty math in calculating the complex relationships between the variables.

I move on to one of the most irritatingly pseudo-scientific things in his book, the “happiness equation,” which he had introduced with the coy promise that it “is the only equation I ask you to consider,” as if positive psychology rests on whole thickets of equations from which the reader will mercifully be spared . . . Now I understand what he is trying to say: that a person’s happiness is determined in some way by their innate disposition (S), their immediate circumstances (a recent job loss or bereavement, for example), and by the efforts (V) that they make to improve their outlook. This could be stated unobjectionably as:

Or, in words: H is a function of S, C, V, where the exact nature of that function is yet to be determined. But to express it as an equation is to invite ridicule. I ask the question that would occur to any first year physics student, “What are the units of measurement?”

Studying 'till the Sun Goes Down by Jekert Gwapo

I’m sure mathematically, Ehrenreich is correct, but she’s missing the point.  The equation is not intended to be filled in with actual numbers, as if you could calculate your happiness with the ease of pressing buttons on a calculator.  It’s simply a way to describe a complex subject in a way that is easier to understand.

The point of the equation is pretty simple:

Some of our happiness is fixed (genetically programmed, perhaps), some is influenced by the conditions we find ourselves in (where we live,health, wealth and marital status, political and cultural factors, etc.), and some is subject to change through voluntary control. Because the V can be influenced, this is the area where, according to Seligman, positive psychology should focus.

Sonja Lyubomirsky also has taken some heat for attaching some percentages to this equation and showing that about 50% of the variance in happiness can be explained by genetics (the set-point or S above), only about 10% by our circumstances (C), and that leaves a whopping 40% that is subject to voluntary influence (V).

The criticism here is somewhat better founded.  These percentages are based on variances across large populations and don’t tell us much about individuals (your personal mileage may vary.)  And there’s a bit of a leap here to assume that you can truly manipulate whatever falls outside of what’s been found in genetics and circumstance.

But these criticisms still miss the point.  Lyubomirsky is using a simple pie chart to communicate three important facts about human happiness:

A lot of it is set (maybe about half).

Some (a lot less than we think) is dependent on our circumstances.

And, there is a chunk left over that is within our power to change.

I find this not only useful, but a powerful message to share with those who may be assuming that their happiness in life is determined completely by factors outside of their control

Another man who uses simple equations to explain deep human truths is Chip Conley, the author of Emotional Equations (and one of my heroes in the hospitality industry.)

His formula for happiness is as follows: 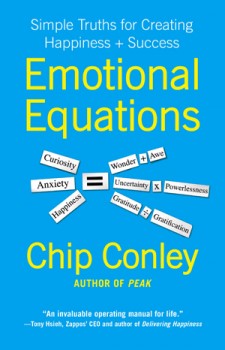 Here, the equation brings to mind Buddhist principles of acceptance and how a shift in mindset can increase happiness more than merely attaining or accomplishing more.  Again, the math is flawed because the equation suggests that having more would cause your happiness to plummet, but once again, that’s not the point.

Conley uses equations to explore relationships.  There is a relationship between wanting and having that is described here.  Most people focus on having more, but Conley’s equation asks us to think about wanting less (or better yet, wanting and appreciating what we already have.)  His book is filled with simple equations to help readers come to terms with the factors that allow certain emotions to rise and fall through life.

For me, all of these equations are useful.  They force us to use an analytical part of our brain to consider the forces at play between variables that are unquantifiable.   To the critics of these equations, I’d like to share the same advice that Conley gives to his readers . . . “try not to let the math distract you from the bigger message.”

p.s. What would your happiness equation be?  I think mine would be something like this:

Ehrenreich, B. (2010).  Bright-Sided: How Positive Thinking Is Undermining America. Picador.

Lyubomirsky, S. (2008). The How of Happiness: A scientific approach to getting the life you want. New York: Penguin Press.

Searching for World Peace at Google
Willpower and Behavior Change: Wanting What You Want to Want

12 Responses to On Happiness Equations