By Jeremy McCarthy on October 26, 2010 in Book Reviews, Positive Psychology 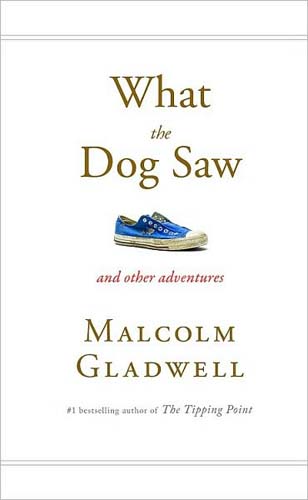 The stories in this book have no discernible theme, being about everything from the profiling of serial killers to how to make a better ketchup.  And while the book seems to be a hodge-podge collection of articles on a variety of seemingly unrelated topics, Gladwell’s writing style creates a theme in and of itself.

Gladwell has a peculiar knack for finding things that seem, at first glance, to be one way, and then showing how they might appear from a different perspective.  This is the recurring principle that runs through all of the stories in “What the Dog Saw.”  In Dangerous Minds, he talks about the amazing stories of psychological profilers who were able to describe serial killers and aid in their pursuit (the book and movie, Silence of the Lambs was based on this idea.)  But then he shows how these profilers were at best using a parlor trick and probably were more of a distraction than a help in most cases.  In The Ketchup Conundrum, he describes how Grey Poupon and others expanded the market share for mustard by inventing new flavors, and then he shows how no one was able to do the same for ketchup.

Again and again, Gladwell does this double-take: in Blowup he shows us how the failure of o-rings in the Challenger space shuttle would ensure that NASA would not make the mistake again in the future.  But then he shows us how this would allow them to be more lax in other areas, so the net amount of risk would not be improved (I wrote about this in a previous article, “And Some Will Die: Risk and Reality on the Road.”)  In The Talent Myth he talks about how top consultants (e.g. McKinsey) have identified an obsession with rewarding and retaining top talent as the key to success in the best businesses.  And then he shows us examples (such as Enron) where this strategy was a failure.

What I like about Gladwell’s writing is that he likes to pick apart dichotomies.  The message of these stories is that humanity is far more complex than we usually understand at first glance.  It is easier in our minds to boil it down to black and white, this or that, yes or no.  But as Gladwell shows, every rule, every truth, every maxim, has its exceptions.  I try to do the same thing in my own writing (e.g. Breaking News: Money Actually Can Buy Happiness, Turn to the Dark Side: The Power of Negative Thinking, In Defense of Pampering) although perhaps not as poetically as Gladwell does.

My only criticism of Gladwell is he tends to stay within the dichotomy.  He shows you one side of the story, and then he shows you the other side.  But he is still showing a simplified dichotomy, rather than the more complex version where the truth lies.  In a false dichotomy, we are given a choice of A or B.  But in reality both (or neither) are true.  Positive psychology gets this criticism as well.  Some say it counteracts a bias towards the negative in psychology by creating its own bias towards the positive (expect an article from me on this in the future.)  The truth is almost always somewhere in the middle.  Or sometimes the answer is A and sometimes the answer is B.  In these kinds of debates, everyone is right and everyone is wrong, but the truth remains fuzzy.

Gladwell, M. (2002).  The Tipping Point: How Little Things Can Make a Big Difference. Back Bay Books.

Get Thee to a Spa: Important New Research on the Benefits of Massage
Positive Health (but Where is the Voice of Spa?)

5 Responses to Picking Apart False Dichotomies: What the Dog Saw