Today’s article is by TeachStreet’s Kenji Crosland.  TeachStreet is a website dedicated to providing local and online classes, as well as connections to reliable psychology tutors.  The Psychology of Wellbeing is a featured blog on the TeachStreet website.  You can learn more about TeachStreet’s educational community here. 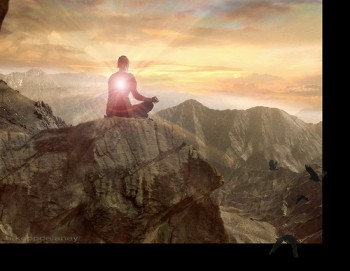 The philosopher and spiritual teacher J. Krishnamurti once said that “observation without judgement is the highest form of intelligence.” Although the words themselves were profound, I had at first found it difficult to grasp the meaning of what he said. How can there NOT be judgement? I thought, isn’t observing in and of itself an act of judgement?  As I got more involved in the practice of open monitoring meditation, however, I realized that there was a depth to what he had said.

First there’s the act of “observing” and then there’s the act of “analyzing, judging and labeling” what we have observed. For most people, including myself, these two acts were so intertwined that it became impossible to distinguish the one from the other.

In “open monitoring meditation” one begins to practice “awareness of thinking.” All we must do to practice this form of meditation is to be aware of our thoughts and feelings and observe them without attachment. In many ways the meditator becomes a scientific observer of the workings of his or her own mind, and begins to have an increasing awareness of just what thoughts bring about changes in emotions: what makes them happy and what makes them sad.

For those who practice open monitoring meditation, there are two forms of thought. First, there is the “stream of consciousness” that we associate with the mind. This is the “voice in our head” that provides us with judgements, worries, and self-criticisms. The second form of thought (or rather, “awareness”) is the “awareness that is aware” of the voice in the mind. If you take a step back and allow yourself to be aware of your stream of consciousness, eventually the chatter will subside and all that’s left is a sense of stillness and peace. This is the essence of open monitoring mediation, or what some others may call “Zen.”

But how can you prove that this “sense of awareness” is any different from regular thinking? The short answer is: “You probably can’t”, but there IS evidence to show that the meditator’s brain works very differently from the non-practitioner’s brain. According to EEG scans, meditators who practice open monitoring meditation increased gamma-band oscillations in the brain. These are generally very faint for most people, but are quite pronounced in the meditators’ brains. These gamma-band oscillations are associated with higher levels of attention, focus and working memory. My guess, however, is that it goes much further that that.

The practice of open monitoring meditation is quite simple. In fact, I’m practicing a form of it right now as I write this blog post. As I type, I allow myself to be aware of my breathing, of my fingers touching each key, and the feeling of warmth of my back against the chair. I also am aware of random thoughts that come through my head. I observe them, and let them pass. All of this activity helps ground me in the present moment. Thus, I’m not worried about what I’m going to say or whether the words coming out on the page make sense or whether they’ll be considered “stupid” or “brilliant” or not. With the self-critic out of the way, the words flow effortlessly.

You can practice this meditation while doing any activity, even just walking down the street. As you walk down the street, feel your feet against your socks and shoes, and feel the pressure of the ground against your soles. Also, be aware of your breathing, and of every sight and sound. Don’t judge what you see or hear, just be be aware of it. If you do judge, just be aware of the judgement, and refrain from judging that. When you do this, all thought is focused what you’re doing right now, and whatever you think you have to do, whatever email you have to answer can wait until you’re actually sitting in front of your computer with your inbox open.

The practice of bringing a meditative quality to every action you perform can do much to reduce anxiety and worry, since much of what you’re worried about isn’t actually happening right now. Also, it can be an easy habit to adopt because all it takes is a few meditative moments per day and sooner or later meditative focus becomes an element in everything you do.

Willpower and Waypower: The Secret to Accomplishing All Your Goals for the New Year
On Eating Animals

8 Responses to Open Your Mind with Open Monitoring Meditation