By Jeremy McCarthy on July 3, 2012 in Facts of Life, Positive Psychology, Questions of Science 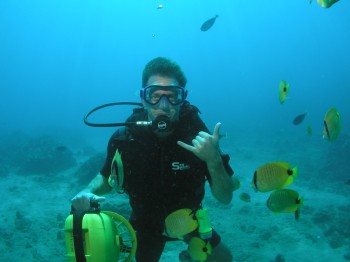 Some of the best years of my life were spent living on the island paradise of Maui, Hawaii.  It is hard to explain what it feels like to be constantly exposed to so many experiences of transcendent beauty.  For the islanders, they are so commonplace that they have a name: “Maui moments.”

Anyone who has lived on Maui will know exactly what I’m talking about.  Whether it’s sharing a spectacular sunset with a loved one, seeing a humpback whale leaping out of the ocean, finding a hidden waterfall, snorkeling with a turtle or riding down the face of a perfect wave, Maui offers moments of joy and beauty at every turn.

I am not a religious person, but in those moments connecting with nature on the island of Maui, I always felt a deep sense of spirituality and meaning.

Hiking into the Crater of Haleakala

In research on spirituality, there is an often reported positive link between positive emotions and spirituality.  People who are more spiritual have been found to have a better social support network, better self esteem, more happiness and a greater sense of meaning in their lives.  For the purposes of these studies, spirituality is generally described as a feeling of connection to something greater than one’s self  (or “the search for the sacred” as Ken Pargament calls it.)  This is not to be confused with “religiosity” which is a related but distinct construct pertaining to membership in an organization with a specific hierarchy, systems, rules and rituals for how spirituality is practiced.

Most of the research on spirituality divides people into two camps: those who are spiritual and those who are not.  Once everyone is neatly classified into their category, researchers can compare a variety of psychological variables and look for differences between them.

Todd Kashdan from George Mason University and John Nezlek from the College of William and Mary are currently publishing a new research study that looks at spirituality in an entirely different way.

Rather than classify people into binary buckets of “spiritual or not,” they decided to look at “within person” spirituality, i.e. measuring how changes in spirituality from day to day can affect wellbeing in the same person.

In order to do this, the first thing they had to do was ascertain that spirituality levels do in fact change in people from day to day.  Unsurprisingly, they did find this to be the case (in fact, there was no one in the study who showed a stable level of spirituality from day to day.) 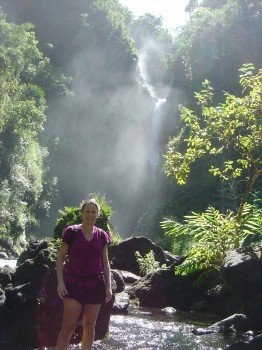 Hana V Waterfall (where I proposed to my wife)

The researchers predicted and subsequently found that the positive link between spirituality and wellbeing continues to be found in the within person variability as it is commonly found in comparisons between people.   This is important because this evidence strengthens the possibility of a causal link between positive emotions and spirituality (and not just some third variable coincidentally shared by two distinct groups of people.)

If I think back to my experiences on Maui, 24 hours may be too big of a window to truly measure the effect of positive emotions on feelings of spirituality.  Watching the silhouette of a breaching whale against the backdrop of a pink sky while waiting for the “green flash” might not make me feel spiritual the next day.  But in those fleeting moments, I feel like God is giving me a high five.

This is consistent with the way another set of researchers, Laura King and Joshua Hicks, describe the causal link between positive affect and meaning in life.  First they consider “mood-as-information”, i.e. if you ask people about their feelings of spirituality, they are likely to assess how they are feeling emotionally in that moment, and use that as a proxy for their global assessment of meaning in life.  Their research suggests that this explains some, but not all, of the link between mood and meaning.

They also reference Barbara Fredrickson’s “broaden and build” theory of positive emotions.  This research suggests that positive emotions open us up to “big picture” thinking.  In this state, researchers suggest, it may “be easier to recognize how one’s daily activities are connected to a larger framework of meaning.”   Unfortunately, this relationship, while appealing, has not held up under scientific inquiry.

The recent work of all these researchers suggests that the relationship between spirituality and wellbeing may be more nuanced than previously thought.  According to King and Hicks, it may be that positive emotions are used as an assessment of meaning only when other meaning related variables are not sufficient.  In other words, for those who can recall a variety of sources of meaning, such as a high level of religious commitment or strong social connections, the mood is not as relevant.  But when these are not present, mood and emotion play a stronger role. 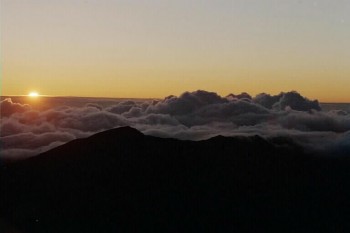 Sunrise from the Top of Haleakala

This research is fascinating and important, digging into the mushy unknowns of the human soul.  But my suggestion to these researchers is to head to the island of Maui.  Every morning a group of people huddle together in the cold pre-dawn hours at the top of Haleakala volcano.  When the sun breaks through the horizon, lighting up the spectacular island landscape, all who made the journey are rewarded with a sense of joy and meaning that strikes them to their very core.  In those moments, no one pauses to think about which came first.  It’s just another Maui moment.

Kashdan, T.B., & Nezlek, J.B. (in press). Whether, when, and how is spirituality related to well-being? Moving beyond single occasion questionnaires to understanding daily process. Personality and Social Psychology Bulletin

King, L. A. & Hicks, J. A. (2012).  Positive affect and meaning in life: The intersection of hedonism and eudaimonia. In P. T. P. Wong’s (Ed.) The Human Quest for Meaning: Theories, Research, and Applications (Personality and Clinical Psychology), 125-142. Routledge.

The Intersection of Spas and Wellness
The Psychology of Spas & Wellbeing

5 Responses to On Spirituality, Wellbeing and Maui Moments