By Daniel S. Bowling III on December 10, 2010 in Guest Bloggers, Positive Psychology, Wellbeing in the World of Work

I am excited to present this fascinating look at the history of our relationship with happiness from Dan Bowling, a practicing lawer, consultant, executive coach and a research fellow at Penn’s Positive Psychology Center.  Dan has been researching the psychology of law practice as it relates to wellbeing.  You can read more about his work here, here and here. 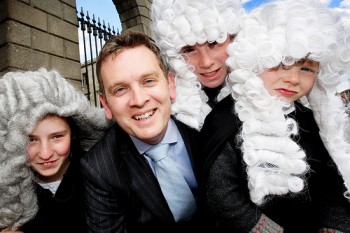 It may come as a surprise to you that lawyers and psychological well-being are intextricably joined. A surprise, because if you are like many people, your only extended exposure to a lawyer has been your husband’s divorce lawyer, or the assistant DA who thought your kid’s speedful romp down I-85 in your sports car deserved a night in the detention center. Or maybe that pompous adjunct who taught your undergrad Con Law class, wore a bow tie, and thought he was Professor Kingsfield in Paper Chase, browbeating you with a bastardized version of the Socratic method. Not exactly your image of happiness, right? Even if you have friends or family members who are lawyers, happiness is probably not the first adjective that comes to mind when they walk in late at Thanksgiving, fat stack of files stuffed underarm like a dinner ham.

Survey data, by the way, backs up this impression of lawyers and unhappiness. As a profession, lawyers suffer from depression and anxiety-associated disorders at a rate much higher than the general population, including other high-stress professions such as medicine. This seems unfathomable given the relative wealth, education, and prestige lawyers enjoy–factors which predict happiness in other walks of life.

But this is not another article about lawyers and depression. It is about you, and how you ended up in a place where your own happiness is not only acceptable, but encouraged (indeed, an “inalienable right” in our cultural history.)  This was not always so, and in no small part you can thank lawyers and their philosophical predecessors for it.

It is an article of faith among those who study positive psychology that happiness is in large part of one’s own choosing. Choosing optimism. Choosing to live well, to exercise and eat good foods.  Choosing to go to art museums, to travel, take courses and read good books. These are all choices. But the very fact that we can make choices such as these would come as a shock to our genetic ancestors, who lived most of their life constrained by the hunt for food and struggle for survival, where choice was not picking among desirable things but instintictive twiches for continued existence.

Later, as formal societies began their development, most humans lived according to the dictates of others, with little or no choice over their circumstances. Even persons of high social and political standing lived with only the choices of the King or the Church to guide daily existence (and still do in certain corners of the World.) Personal well-being (choosing to be happy) was not a serious or relevant object of consideration.

How did happiness get put on the table, so to speak, and what does law have to do with it? Let me point to a few inflection points in history, at least Western history. The first was in a small English community known as Runnymeade. Here, in 1215, King John signed much of his power over to the noblemen of the country in a legal document known as the Magna Carta (there is no record of what the noblemen’s’ law firm billed for the drafting work). This limitation on the absolute power of the monarch was instrumental in creating the rule of law as we know it, which brings with it constructs such as individual rights.

The other was in 1776 when a group largely composed of lawyers penned the Declaration of Independence and held certain “truths to be self-evident,” among them, the “pursuit of happiness.” While their definition of happiness was a very broad notion of well-being, this was a philosophical thunderclap in colonial America at the time. The God of Cotton Mather and the other religious and political leaders of the day was an Old Testament God of fire and brimstone, where happiness was something that awaited solely in the afterlife, as Professor Peter Allin of Emory University has noted.

While the lawyers in our history books were instrumental in shifting attitudes towards happiness and paving pathways for its development, in the modern era, they struggle to enjoy the fruits of their own labors and the role of the lawyer as a procurer of wellbeing has become obscured.  Recently, I have undertaken the difficult challenge of trying to convince modern-day American lawyers and law students that wellbeing is not only a pleasant thing, it is essential to legal and professional ethics. To do so, I have them revisit the Aristotelian notion that the purpose of life is to seek well-being, or Eudaimonia, which can be best be understood as something relating to character strength and virtue and their employment in the civic good.

Which is exactly what legal professionalism and ethics are all about. The reason many lawyers today are so unhappy is because they forgot what motivated them to become lawyers:  wanting to solve problems, help people, embrace intellectual challenge, be Atticus Finch. For many, law is no longer a calling, just a job with ridiculous hours, stress, and unpaid law school debt, so it should come as no surprise that legal professionalism has been in decline among lawyers polled for over a quarter of a century.

But it doesn’t have to be. Lawyers are at the very basis of our ability to pursue happiness in virtually whatever fashion we see fit today, and there is no reason they can’t find it the practice of law. This is the focus of much of my work, and a topic for another day. Until then, while it might be too much to ask to “give your lawyer a hug,” do take time now and then to reflect on the role law and lawyers play in your own happiness and the happiness of your society.

Ok, except for that divorce lawyer.

Mental Yoga: Why Psychological Flexibility is the Key to Your Wellbeing
Where does Radical Game Changing Innovation come From?

8 Responses to Happy? Thank a Lawyer