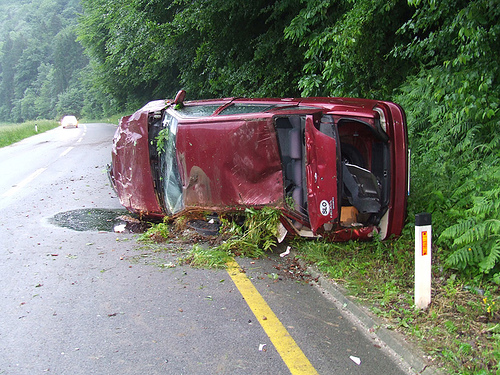 This weekend is a holiday weekend.  Millions of families will pile into their cars to spend a few days away relaxing, sight-seeing, or celebrating.  And some will crash . . . and some will die.  This is a sobering thought, inspired by one of the most disturbing videos I have ever seen (see disclosure below before clicking this link.)  The video is a compilation of clips, both real and enacted, showing some of the most horrific and violent car accidents you could possibly imagine.  The makers of this video clearly wanted to “shock and awe” their viewers into driving more carefully.

Note:  I thought about embedding the video at the top of this post.  But due to its graphic nature, I decided to simply include a link.  Consider it rated NC-17 for graphic violence.  You have been warned.  If you have the stomach for it, go ahead and watch it. Actually, I recommend you do.

Although the video was deeply disturbing, I was glad I watched it.  The effect of having these gruesome images seared into my mind is a greater sense of caution and awareness when I am on the road.  I even posted it on my facebook page (much to the surprise of my facebook friends who are used to more uplifting content on my page.)  It reminded me to slow down and have a greater sense of responsibility for my actions on the road, and I hoped that it would do the same for the millions of other drivers out there.

Driving recklessly is one of those infractions that is rarely enforced (i.e. people don’t get caught) and not severely punished (i.e. fines and penalties do not match the potential harm that can be caused by the crime.)  The risk of an accident is typically much higher than people realize, and even a small fender bender with no injuries can create a traffic jam that causes misery for a large number of people (not to mention tying up law enforcement and rescue resources and increasing the risk of further accidents.)

But people are not thinking about the risk of accidents when they are driving.  They are thinking about where they need to be and how they can get there more quickly.  And psychology has discovered that when people do think about risk, they don’t really think about it in any kind of a logical way.  The best example of this is peoples’ irrational fears of plane crashes and shark attacks.  Many people are afraid to get on an airplane but don’t think twice about spending every day zipping along the freeway to get to work.  In fact, the likelihood of dying in a car crash is 62 times greater than in a plane crash (and 2,178 times greater on a motorcycle.)  Unfortunately, people don’t calculate their risk based on logic and statistics.  They calculate it based on emotion and heuristics.

Heuristics are like little shortcuts that our minds use to solve problems.  Most of the time, they help us, allowing our brain to process vast amounts of information in an efficient and effective manner.  But sometimes they lead us astray.  When calculating risk, we tend to use an “availability heuristic”, meaning we judge the likelihood of an event by scanning our mind for any available images or memories of the event happening.  News reports of plane crashes and shark attacks are seared into our mind because of the horrific imagery associated with them, and car crashes fade into the background as a seemingly minor event.  And so our mind, mistakenly, tells us that because car crashes are less horrific, they are also less likely or less dangerous than plane crashes (a.k.a. “probability neglect”.)

This irrational response to risk pervades every aspect of our society, causing us to accept as normal risks that are very likely but less horrific in our minds (such as car accidents), and yet devote huge amounts of public time, money and resources to preventing more horrific risks, even though their actual likelihood is much lower (terrorist attacks, natural disasters, etc.)

To illustrate this point, Richard Zeckhauser and Cass Sunstein of Harvard University gave this example, in a paper on “Overreaction to Fearsome Risks”:

Arguably, the most severe recent example of overreaction to a risk threat is the follow-on to the terrorist attacks of September 11, 2001. Public fears and anxieties helped to produce the Iraq War, and to private and public costs that were orders of magnitude higher than the costs of the attacks themselves. A full explanation of the Iraq War would of course have to include a number of factors, but any such explanation would point, in part, to action bias and probability neglect (p. 12).

Another implication of our approach to these kinds of risks is that the steps we take to mitigate them are often fruitless.  Because our probability neglect prevents us from taking these risks seriously, we tend to reach “risk homeostasis”.  So advances in technology such as airbags and anti-lock brakes, or safety regulations such as seat-belt and helmet laws, don’t actually reduce our risks of death and injury, they simply allow us to drive faster and worry less.  In other words we “consume” the reduction of risk in exchange for increased speed, convenience or pleasure.  (You can read a great article on the consumption of reduction of risk in the case of the Challenger space shuttle explosion by Malcolm Gladwell here—also featured in his book, “What the Dog Saw,” which I will be writing a review of in a future article.)

Did you watch the video?  If so, I’m sure you can see how its creators attempted to use gore and emotion to change our behavior on the roadways.  Maybe this seems excessive, or in bad taste.  But maybe that is exactly what we need:  graphic, violent and emotional images to help us remember how precious life is, and how dangerous an automobile is.

8 Responses to And Some Will Die: Risk and Reality on the Road