By Jeremy McCarthy on April 24, 2012 in Facts of Life, Positive Psychology

Do you have musical talent?   Do you wish you did?  A small percentage of us seem to have the gift of music but most (if not all) of us wish we had it.  Whatever our favorite musical genre is, there is a natural tendency to admire our favorite musicians, listen raptly to the incredible sounds they are able to produce with their voice or their instrument, and to wish or imagine, if only for a moment, that maybe someday we too could produce such melodies.

But to the non-musically inclined, this can seem like an impossible mountain to climb.  Music is often thought of as a “gift”, something you are either endowed with or not.  When people describe themselves as having “no rhythm” or “no ear for music” or “tone deaf”, they generally think of these things as defining characteristics.  They are talents you are either born with or not.

Gary Marcus, a psychology professor at NYU, was one of those poor souls born without a knack for music.  But as a psychology professor he was familiar with a variety of research on skill development.  Carol Dweck’s research on “Mindset” for example, which shows that people who believe that skill can be developed will be far more successful (evidence supporting the old saw, “whether you believe you can or can’t, you’re right.”)  Or Anders Ericsson, who found that what separates the experts from the amateurs (in any field) is about 10,000 hours of deliberate practice. 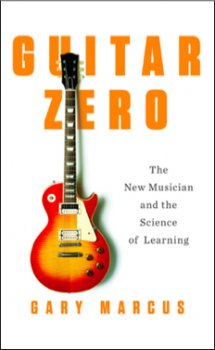 Marcus decided to put it to the test in a personal way, and set out to see if a person with no musical talent could become a musician.  He’s written a book about his journey, appropriately titled “Guitar Zero,” a reference to both his initial lack of talent and his addiction to the game “Guitar Hero,” which perhaps laid the foundation for his musical journey.

As you might imagine (because it would not be a very notable book otherwise,) Marcus succeeds in his quest to become a guitarist.  But for anyone with a budding interest in music, his book is worth reading to see some of the conclusions he makes along the way.

The most important lesson of course, is that this kind of change is possible.  We can become something we aren’t.  We can change who we are.  Talent can be cultivated.

I personally learned this powerful lesson as an awkward, bookish teenager, when I intentionally chose to become an athlete, and joined my high school swim team.  That decision, and the subsequent transformation in my life, paved the way for me to pursue a great number of other successes including two black belts (in Hapkido and Tang Soo Do), learning to Salsa Dance, and even learning how to play the guitar.  Carol Dweck is right.  Once you believe change is possible, the world is your oyster.

But it’s not easy. 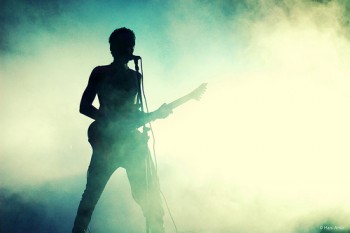 My motto now is, “you can have anything you want, you just can’t have everything you want.”  It takes hard work and sacrifice.  It’s not just 10,000 hours, it’s 10,000 hours of intense, concentrated, repetitive, rigorous practice that creates expertise.  As one of my old coaches used to say, “practice doesn’t make perfect, perfect practice makes perfect!”

Want to become a guitarist?  A novelist?  A motivational speaker?  An elite athlete?  A neurosurgeon?  You can do any of the above, as long as you are willing to sacrifice many other things in your life to get there.

It’s not that talent doesn’t play a role at all.  (See a critique of Ericsson’s 10,000 hours theory here.)  Marcus pooh-poohs the simplicity of Malcolm Gladwell’s “Outliers” where he describes elite performance as the outcome of 1. extensive practice and 2.luck.  Marcus notes that not all musicians develop the same way.  Maybe some have a flair for finger speed, while others may have a unique ear for finding different kinds of harmonies.

Anyone can learn music.  But having natural talent means you might pick things up quicker, or you might be able to go farther with your skills.  Marcus cites an often overlooked study by Edwin Gordon, showing that talent predicted about half the variability in musical skill development in a group of students after three years of studying.

Anyone can become a musician.  Not anyone can become the best musician.  The good news is, you don’t have to be Paul McCartney to enjoy making music.  Pick up a guitar, or a harmonica, or a microphone and start with 15 minutes a day of deliberate practice.  For Marcus, myself, and countless others, playing music is not about becoming the next Jimi Hendrix.  It’s about finding flow and simply enjoying life.

Marcus, G. (2012). Guitar Zero: The New Musician and the Science of Learning.  The Penguin Press HC.

9 Responses to You Too Can Become a Musician: The Psychology of Talent