By Jeremy McCarthy on September 17, 2013 in Facts of Life, Positive Psychology 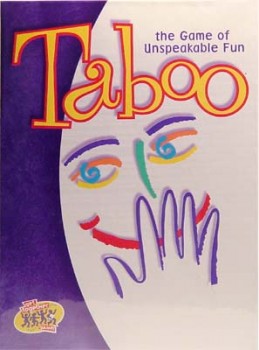 Have you ever played “Taboo?” It’s a fun game by Hasbro that forces participants to describe something without using many of the words that people might commonly use to describe it.  You might have to explain “pinball” for example, without using arcade, game, tilt, flippers, roll or, of course, pinball.

Not only is the game fun, it challenges players to think differently about how they communicate.  Because certain words are “taboo” they can’t fall back on familiar patterns. They are forced to use language in a new way.

Eliezer Yudkowsky, who writes about human rationality on the “Less Wrong” blog, suggests that making certain words taboo is a way to bring clarity to a debate where people might be using the same word, but coming from different perspectives. Luc B via Compfight

For example, the old thought experiment, “if a tree falls in a forest, and no one is around to hear it, does it make a sound?” gets people debating different perspectives that are generally about how one defines the word “sound.”  Does “sound” describe the vibrations creating by the tree falling?  Or does “sound” describe the experience of those vibrations in the ear of a living being?

Since one says “sound” and one says “~sound”, we must have a contradiction, right? But suppose that they both dereference their pointers before speaking:

Now there is no longer an apparent collision – all they had to do was prohibit themselves from using the word sound. If “acoustic vibrations” came into dispute, we would just play Taboo again and say “pressure waves in a material medium”; if necessary we would play Taboo again on the word “wave” and replace it with the wave equation. (Play Taboo on “auditory experience” and you get “That form of sensory processing, within the human brain, which takes as input a linear time series of frequency mixes.”

Excerpt from: LessWrong. “A Human’s Guide to Words” from http://lesswrong.com/lw/nu/taboo_your_words/.

I think this “Taboo” approach could also help with many of the debates we have around happiness.  Happiness, I’ve been somewhat surprised to find, is a controversial subject.  Is the pursuit of happiness a worthwhile goal?  Should governments be measuring and ensuring the happiness of their citizens?  Does money make us happy?  Is happiness good for our health?  Do children contribute to (or take away from) our happiness?  These are all questions I have heard debated ad infinitum since I began studying positive psychology.

Albert: “Happiness is a universal goal that we all have and is the ultimate purpose for living.”

Barry: “Happiness is a shallow hedonic pursuit that distracts us from more meaningful objectives.”

How can we reconcile two such diametrically opposed viewpoints?

We could ask Albert and Barry to describe their position without using the word “happiness.” While we are at it, let’s make other commonly used words taboo, such as joy, emotions, fulfillment, satisfaction, contentment, or flourishing.

Now Albert and Barry are forced to define their positions more clearly:

Albert: “{The ultimate realization of all of our preferences for the life we live and the person we become} is a universal goal that we all have and is the purpose for living.”

Barry:  “{Subjectively hedonic experience} is a shallow pursuit that distracts us from more meaningful objectives.”

Once again, the apparent conflict disappears (or is greatly diminished) when we take a step back from our familiar language patterns.

In a previous article, I said that “the first rule of happiness” is “you do not talk about happiness.”  It just muddles the issue when communication is built around a word that has so many different meanings and nuances.  But now when I find myself being drawn into a happiness debate, I just suggest a game of Happiness Taboo.

Engagement 2.0
Be the Change