By Jeremy McCarthy on May 27, 2014 in Facts of Life, Fitness and Exercise 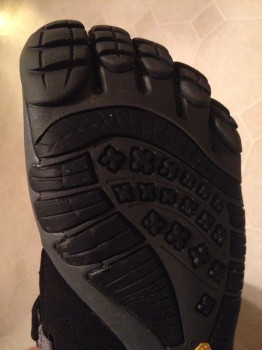 I literally JUST bought a pair of the now-infamous Vibram FiveFinger shoes.  I was excited by the purchase.  I brought them home and tore them out of the box with the same fervor that my 4-year-old son shows when opening Christmas presents.  But by the time I had finally managed to wrangle my wayward piggies into their cozy toe holes, the internet was ablaze with the news of a big scandal:  the Vibram FiveFinger shoes are a scam.

The news stories made it clear that my investment in new footwear technology had been sadly misplaced.  Twitter was abuzz with links to articles with headlines like: “Those barefoot sneakers might be a total scam” or “Five-toed shoes carry no health—or fashion—benefits” or “FiveFingers maker will pay millions to suckers.”

I guess that makes me a sucker.

But here’s the thing.  I didn’t pay much attention to Vibram’s claims for their shoes in the first place.  I never expected the shoes to be some miracle panacea to better foot health and athletic prowess.  And likewise, I also don’t give much credence to those that are thumbing their nose at Vibram now.  The media’s claims that Vibram shoes give “no health benefit” are just as unsupported by evidence as the claim that they strengthen your feet.

I don’t pay any of these messages much heed because I know how we like to talk in our society.  We like to go to extremes.  We love false dichotomies: ignoring the gray areas where the truth lies in favor of the more sensational black and white that make better headlines.  Yesterday, this shoe was the best thing for your feet since Adam gave Eve the first foot massage.  Today, Vibram is a scam, the shoes are worthless and anyone who wears them is a “sucker.”

As consumers we are forced to choose.  Do we stand by Vibram and accept their claims of the benefits of barefoot running?  Or do we reject Vibram as a scam artist, using marketing hype to push their worthless and perhaps even harmful shoes on gullible and unsuspecting rubes.  But like all false dichotomies, this choice is an illusion.  The truth is somewhere in the middle.

The Vibram FiveFinger shoes do strengthen your feet.  They also do cause more injuries.  This is not “either/or.”  It’s “both/and.”

To borrow an elegant phrase from Nassim Taleb, human beings are “antifragile.”  We are strengthened by stressors and bolstered by increased exposure to risk.  That which does not kill us makes us stronger.

So barefoot running–just like weight lifting, athletics, or even shoed running—makes us strong because it exposes our body to risk.  It broadens our repertoire of movement, allowing us to test new ways of moving and using our bodies.  Push the limits of that—with too many miles on paved roads—and yes, you will get injured.  But I’m guessing that there is a “sweet spot,” in terms of how much time and distance we put in, where our antifragile footsies do experience some significant benefits from going barefoot.

Admittedly, I might be more reluctant to wear my FiveFingers in public for a while.  Mainly because I’ll be a bit more self-conscious about those averted glances of passerbys muttering “sucker” under their breath when I pass.  But I don’t love the shoes any less today than I did yesterday. 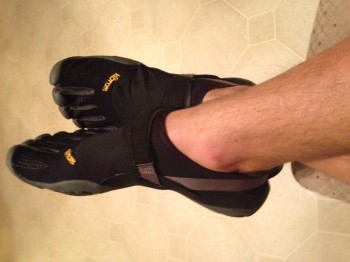 I’m wearing them now, in fact, as I write this.  And they feel pretty good.  Imagine you had been wearing mittens your whole life and someone suddenly handed you a pair of gloves.  It’s pretty liberating.  I think Vibram is probably doing the right thing by settling on their lawsuit about “false claims.”  But I also think they’ve created a good product, which I intend to continue wearing.  Five-toed shoes deserve a place in our shoe racks.  If you don’t have a pair, now is your chance to get them at a really good price.

Strangers on a Train: On Making Eye Contact
Self-Talk: Feeding the Good Wolf

5 Responses to Vibram FiveFingers and the False Dichotomy