The idea that success was based on more than just cognitive intelligence or IQ became popular when Daniel Goleman published his research and book on “Emotional Intelligence.”  He showed that there are several other skill sets that are critical for human success and thriving that are not captured by IQ.

Not only do we need to be brain smart, i.e. have the ability to process information  (including math and language) to find logical solutions to problems, we also need to learn how to relate to others by understanding our own emotions and those of the people we are in relationship with.

EI or EQ, as Emotional Intelligence is often called, includes the ability to understand one’s own emotions (self-awareness), to assess and respond to the emotional needs of others (empathy or social awareness), and then to use this emotional awareness to better manage one’s self and one’s relationships.

Personal and professional applications of EQ have been wildly popular since Goleman introduced his work over a decade below.  Only just recently I wrote about Google’s training program, which is based on both mindfulness and EQ.

But according to leadership consultant Cindy Wigglesworth, EQ and IQ still don’t tell the whole story.  There are actually four different kinds of intelligences that we should consider.*

The first is PQ or physical intelligence, which relates to understanding our bodies and how to maneuver and maintain them.  I say this one comes first because this is the first intelligence we have to develop in childhood, and it also corresponds to fulfilling the foundational needs of hunger, thirst, etc. from the base of Maslow’s hierarchy of needs. 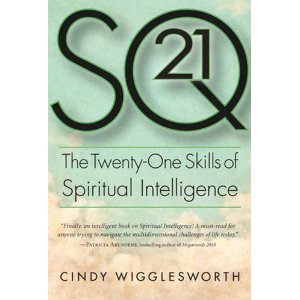 The second intelligence, according to Wigglesworth, is cognitive intelligence or IQ, which becomes becomes the focus of school-age children as we learn logical thinking and language skills.

Emotional intelligence or EQ becomes the focus in adult life as we begin to develop careers and families and realize the importance of relationship and social skills.  EQ ties into the need for love and belonging in the middle of Maslow’s pyramid.

And this brings us to the fourth, and perhaps the most interesting of the four intelligences: spiritual intelligence or SQ.  Wigglesworth believes that SQ becomes increasingly important as we strive (usually later in life) to reach self-actualization at the peak of Maslow’s hierarchy.  Or as Wigglesworth says, it’s about “becoming fully human.” Wigglesworth defines SQ as “the ability to behave with wisdom and compassion, while maintaining inner and outer peace, regardless of the situation.”  The definition may be best understood by considering some of the historical paragons of virtue that many of us have come to admire and revere such as Buddha, Gandhi, Jesus, or Mother Teresa: people who are recognized as acting with wisdom and compassion, even in the face of great challenges.

SQ may be the most important of the four intelligences, not only because it is what will ultimately bring us to express our full potential as human beings, but because it helps us bring out the best of our other abilities as well.  Author Stephen Covey said, “spiritual intelligence is the central and most fundamental of all the intelligences, because it becomes the source of guidance for the other[s].”

Wigglesworth has created a tool (the “SQ21”) that people can use to assess their own SQ.  And her book recommends some “spiritual weightlifting” exercises to help people develop their spiritual muscles.

Her work struggles with the inevitable challenges of tackling such an ethereal subject with an approach grounded in scientific inquiry.  And some of her spiritual skillsets may prove too value-laden for a secular/scientific community to embrace (e.g. “sustaining faith” or “awareness of spiritual laws”.)

But I think it is a noble pursuit to aim the lens of science at the deepest questions of human existence.  Wigglesworth’s work is intended to answer the question, “I want to be a good person—where do I start?”  And while her tools and exercises might  not answer this question definitively, they are “designed to begin a conversation and a learning journey.”

7 Responses to Got Spiritual Intelligence?