By Jeremy McCarthy on April 22, 2014 in Facts of Life, Making a Better World 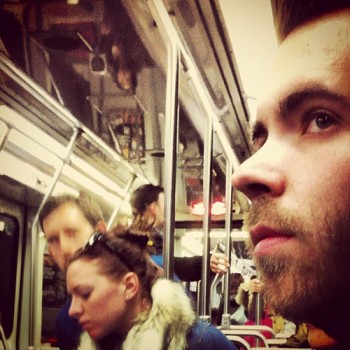 I’ve been working in Manhattan a lot lately, which means a lot more time on the subway.  When you’re not used to it, it’s an interesting experience to be crammed into a small space with so many other human beings.

Naturally, it’s a great opportunity to people-watch, but I notice that I often feel a sense of internal conflict as two competing instincts pull me in different directions.  On one side, I am drawn to look at my fellow passengers.  I think there is research showing that from the time we are born, our gaze is drawn to other people’s faces.  But on the other side, it is awkward and uncomfortable to make eye contact with strangers.  The social etiquette, at least in New York City, clearly demands that you avoid locking eyes with strangers, and should look away when you do incidentally meet eyes with another person.

Eye contact is a powerful aspect of human communication, and not to be taken lightly.  I’ve heard that when two mammals look into each other’s eyes for more than a few seconds, it means they are either about to fight or have sex.  No wonder people prefer the security of staring into their smart phones.

But I can’t help but ask myself if this is human nature or an expression of cultural norms that have evolved over centuries.  Could another culture exist where strangers happily gaze at each other unburdened by social angst or self-consciousness?

It’s not an easy question to answer.  But there are some contextual factors that seem to influence our likelihood to engage in eye contact with those we don’t know:

There is some research to suggest that a simple gesture of eye contact can make a big impact on the wellbeing of the strangers we come into contact with throughout the day.  The simple act of avoidance makes a big impact too.  I can’t help but feel like the world would be a better place if we were more open to these kinds of connections.

The Benefits of Mindlessness
Vibram FiveFingers and the False Dichotomy

One Response to Strangers on a Train: On Making Eye Contact