By Jeremy McCarthy on October 24, 2013 in Making a Better World, Positive Psychology 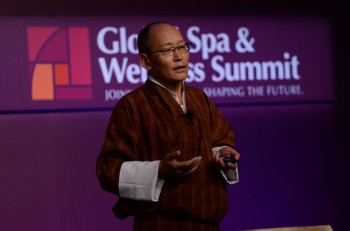 Two weeks ago at the Global Spa & Wellness Summit, I had the chance to hear from Dasho Karma Ura, the President of the Center for Bhutan Studies who spoke about their government’s unique approach towards Gross National Happiness. For the last several years, the Kingdom of Bhutan has inspired the world with their unique model of government.  They have recognized that a country should not be measured on productivity alone, but on the happiness of its citizenry.

They set out to measure things that are more important than productivity with a Gross National Happiness Index that looks at 33 indicators of public wellbeing.  Items include Education, Health, Ecological Diversity and Resilience, Good Governance, Time Use, Cultural Diversity, Community Vitality, Living Standards, Psychological Wellbeing, and more.   Unlike most governments, which base their policy decisions purely on the economy, the kingdom of Bhutan lets happiness be their guide.

The world has been fascinated with Bhutan’s experiment in GNH.  So much so that many other leaders around the world are now looking at incorporating national measures of wellbeing into their governmental analyses.  And people have been going to Bhutan in droves, to learn more about this amazing country.  They even offer a “Gross National Happiness tour,” specifically geared towards anyone wanting to learn more about how their government works.

Unfortunately, the glow of happiness in Bhutan appears to be fading somewhat.  A couple weeks ago, the New York Times reported that the newly elected Prime Minister of Bhutan was shying away from their long-standing philosophy around Gross National Happiness, and focusing on more “concrete” goals. 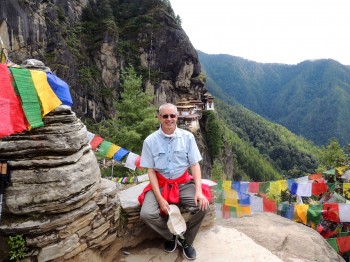 Some friends of mine, Bill and Lori Hutchinson, who own Hutchinson Consulting, were just in Bhutan a few weeks ago and said they detected a “whiff of embarrassment” about the “much-touted” GNH.

There seems to be a sense of entitlement now among the Bhutanese, and important work is not getting done.   Apparently, GNH-inspired tourism had become such a big part of the economy that people seemed to think their job was “to stand around and look happy.”    Bill reports that country homes and traditions were declining as rural farmers abandon their life in the country for opportunities in tourism, technology and other new industries in Thimpu, the rapidly growing capital city.  Workers are imported from India to do many of the harder jobs which, according to Bill, the locals just won’t do.

So is a focus on happiness causing more harm than good in Bhutan?  This would support the ideas of certain psychologists, like Russ Harris, the author of The Happiness Trap, who argues that a pursuit of happiness is destined to backfire.  It can lead people to sacrifice what is important for what feels good. 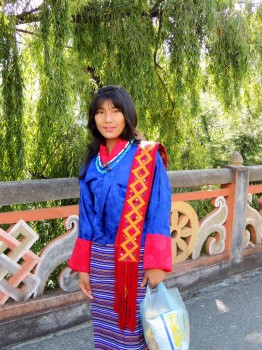 From my perspective, Bhutan’s heart is in the right place, but maybe they have swung too far in the happiness direction.  The new Prime Minister’s approach towards fixing some of Bhutan’s largest problems is probably a needed correction and I still think the world has much to learn from Bhutan.

But after talking to Bill and Lori about their trip, I have to (reluctantly) agree that maybe Gross National Happiness is not the panacea we all might have hoped for.  And the Bhutanese might be having a harder and harder time living up to the reputation as one of the happiest countries on Earth.  Bill told me about a “graceful and smiling woman” who showed them to their room at one of their hotels.  When they asked her if she liked her job she told them, “actually I’m planning to quit.  The hours are too long.”

The Compassionate Diet
Is Happiness a “First World Problem?”