By Jeremy McCarthy on October 31, 2013 in Facts of Life, Positive Psychology PC – My Shots@Photography via Compfight

As October comes to an end, so too does my season of fun.  Every year, from April to October, I spend almost every weekend at the beach in Long Beach, Long Island.  My wife and I both surf and play beach volleyball, and we bring our kids, who play blissfully in the surf and the sand.  For our entire family, these times are precious and are filled with sheer joy.

We’ve also developed close friendships among the other volleyball players in Long Beach. During these summer weekends, we will usually end the day by circling our beach chairs, sharing whatever beer and snacks we may have, and having great conversations while watching the sun set over the boardwalk.

I always feel intense gratitude during these sunset sessions.  “Do you realize,” I will say, “that our quality of life is probably in the top 1% of people on the planet?”  Most of my friends respond to this somewhat incredulously.  But I remind them, that around the world, while we are sipping beers and enjoying a sunset on the beach, millions of other people are dealing with poverty, fighting wars, or struggling against oppressive governments.

In the United States we take it for granted that “the pursuit of happiness” is an inalienable right.  And in recent years, it might even be described as a mass cultural passion, as so many of our citizens seem to be enamored with “self-help” strategies (through books, TV shows, and other popular media) that proclaim to help us to find and create more happiness.

Some might argue that this is a luxury we have as one of the wealthiest nations on Earth.  We can afford to pursue happiness (including leisure activities like surfing and volleyball) because we are not struggling to put food on our tables, or fighting for basic freedoms.

Interestingly, some researchers (Sarah Pressman, Matthew Lopez, and Shane Lopez) set out to measure if happiness is only a “first-world problem.”  They looked at the connections between emotions and health in 142 countries around the world and predicted that this link would become less important in countries where more basic needs (such as food, shelter, and safety) may be lacking. 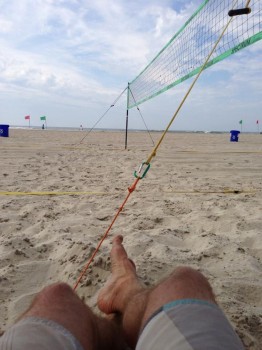 But the results were surprising.  They found that “emotions matter to health everywhere.”  Both positive and negative emotions were linked to subjective reports of health, and the researchers reported that “contrary to our prediction, these links were stronger than the links between unmet basic needs and health.”  Not only that, but the researchers were also surprised to find that the link between positive emotions and health was actually stronger in the countries with a weaker GDP.

Happiness and positive emotional experiences are important.  And they seem to be important even for those who may be struggling with basic needs such as food, shelter and safety.

As we move into this winter season, I know I’ll be anxiously looking forward to getting back to the beach next summer.  And that’s not as much of a first-world problem as it sounds.

Is the Emotion-Health Connection a ”First-World Problem”?

9 Responses to Is Happiness a “First World Problem?”