By Jeremy McCarthy on May 25, 2010 in Facts of Life, Positive Psychology 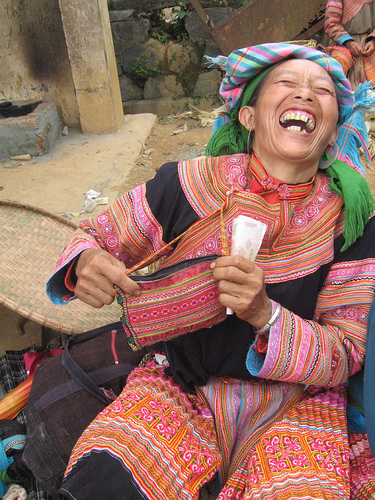 The relationship between wealth and happiness is complicated.  People are always excited to hear (and share) snippets of research that seem to indicate that money doesn’t buy happiness.  It is comforting to believe that happiness and wealth are not related because it means we don’t have to keep trying so hard to make a buck.  But in reality, the relationship is not so clear cut.

Unfortunately, research findings that are counterintuitive are much more exciting (i.e. more likely to get published, more likely to get covered in the media, and more likely to be talked about at cocktail parties) than research that shows what everyone already expects.  And then the media tends to exaggerate those counterintuitive elements to make it even more newsworthy.  You may have heard, for example about the research that shows that lottery winners end up back at the same level of happiness within a year after their life altering event.  But you probably never heard of other research (here and here) done on money winners that showed they did, in fact, rate themselves as happier afterward. The reaction to sudden wealth is complex.  For some people it affords them opportunities to pursue their dreams, for others it alienates their close relationships and rocks the foundations of their identity.  There are no easy answers.

You may have heard about “The Spirit Level,” which is an excellent book, filled with compelling research that shows it is not so much the wealth of a nation that has an effect on happiness but the level of equality in how the wealth is distributed.  The greater the inequality, the greater the misery.  But if you read “The Spirit Level Delusion” or some of the other critiques of this book (here and here), you would realize that as compelling as their research is, it still doesn’t tell the full story.  It is tempting to think of research data as pure and unbiased, or “just the facts.”  But in reality, it can be manipulated and presented in different ways to tell a variety of stories.

There is, contrary to urban legend, sound research showing that, on average, wealthier nations are happier than poorer nations, and within countries, wealthier individuals are happier than poorer individuals.  One finding that is often publicized is that the impact on happiness decreases as nations get wealthier (i.e. for the poor, money can make a huge impact, but as you get wealthier, it is a lot harder to buy happiness with money.)  This does not necessarily mean that there is no relationship; it’s just that the relationship is on a log scale.

Although there is a strong relationship between wealth and happiness, money is not the only factor or the United States would be one of the happiest countries in the world (we are not.)  Some countries rise above the curve (like Latin American countries where strong family values, religion and cultural homogeneity seem to give people a happiness boost) and some fall below (like Eastern European nations where political instability drags everyone down.)

And then there is the quandary of why as wealth has increased over the last 100 years, the happiness needle hasn’t moved much (a.k.a. the “Easterlin paradox”).  There are a lot of possible explanations for this:

1.  Happiness is based on relative wealth or income.  Individual happiness only goes up due to comparison when someone rises above their lot in life.  If everyone gets wealthy there is no impact.

2.  Hedonic adaptation.  We quickly adapt to whatever new situation we find ourselves in so happiness is an elusive goal that always remains just out of reach.

3.  The paradox of choice.  Greater wealth has brought with it new forms of stress and personal disconnection that offset any possible happiness gains that the wealth may have provided.

And then, there is also research to suggest that growing national income does go with greater happiness (and here and here) after all.

The point is, don’t believe the fairy tale (or the media hype) that would have you believe that money and happiness are not related.  There is a relationship between wealth and happiness but it is a complex one.  How you got your wealth (becoming a millionaire when you started out as a billionaire is not likely to bring happiness), what you spend it on (spending your money on others or buying experiences rather than things can bring greater happiness), and how it makes you feel (compared to others perhaps), all influence the psychological impact of your financial situation.  Money in and of itself does not bring happiness, but money provides security, health care, time, and freedom to pursue those things that make life worth living.

Can money buy happiness?  I think it can.  But you have to invest it wisely.

Weiner, E. (2008). The Geography of Bliss: One Grump’s Search for the Happiest Places in the World. New York: Hachette.