By Jeremy McCarthy on November 16, 2010 in Positive Psychology 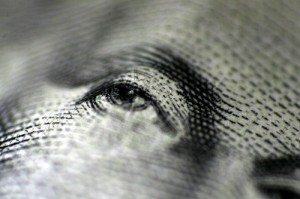 George is Keeping an Eye on You by peasap

A story that was posted earlier this year on the Wall Street Journal blog, “The Wealth Report,” described a wealthy man who gave away his entire fortune as a means of achieving greater happiness.  His feeling was that money and a luxury lifestyle were obstacles to being happy, so he decided he wanted to give everything away.  He claims to have wanted to help the poor and so he planned to give all his money to microfinance charities (ironic that he would give money as a source of aid since he seemed to feel the money was only a hindrance to his personal happiness.)

This story elicits strong reactions from people.  I posted this out on facebook and twitter (see my friend Lisa Nielsen’s excellent blog about using your social network as a  personal learning network) and got diverse reactions from different people.  Some people admired the man for doing something which is clearly difficult and admirable.  We all like to read (and pass on, and talk about at cocktail parties, etc.) the research that suggests that money and happiness are not as closely related as most people think.  But it is rare to find an example of someone who actually tests this hypothesis by giving their riches away.  Others who read this story think the guy is a nutjob and should accept responsibility for the fact that he couldn’t convert his cash into happiness.  To this camp, the money is not the problem–he is.  They believe happiness is not about what you have or don’t have, but about what you do with what you have.

Then there is the wonderful story of Kevin Salwen who wrote, “The Power of Half” (who is maybe only half as nutty as the individual above.)  His 14 year-old daughter convinced him to sell his house and give half the proceeds away to charity.  Reading this story (you can read Nicholas D. Kristof’s New York Times write up here,) you get the sense that both of the reactions to the above story are appropriate.  On the one hand, giving away large amounts of your hard-earned money and property is admirable and inspiring.  On the other hand, the way you do it has a lot to do with how it might impact your happiness.

In Salwen’s case, it evolved as a family project.  Because the family worked on it together, it brought them closer together.  They found that moving into a smaller house also forced them to spend more time together.  As he described it to Kristof, they “essentially traded stuff for togetherness and connectedness.” This seems like a good deal and a worthwhile investment if you can figure out how to convert your own nest egg into a better bond with your loved ones.

If these stories interest you, you might also like  “The Spirit Level: Why Greater Equality Makes Societies Stronger” by Richard G. Wilkinson and Kate Pickett.  They argue that redistribution of wealth is a way to make everyone happier.  Their book provides an overwhelming amount of research that a nation’s health and functioning can be predicted by measuring the gap between the wealthiest and the poorest of the nations citizens.  They show how creating greater equality in a society would create greater well-being for everyone.

The relationship between money and happiness is complex (see my article on this here,) and may not be as simple as Wilkinson and Picket would have us believe.  The London Review of Books highlights some of the challenges (lies, damn lies, and statistics) in interpreting the data they present (their review is aptly titled “How messy it all is”).  Recent research done by Maarten Berg and Ruut Veenhoven of Erasmus University Rotterdam showed that when the wealth of a nation is a controlled for, income inequality appears to have no effect on the happiness of a people.

So what is the takeaway from all of this seemingly contradictory evidence?  Is there a relationship between money and happiness, and if so what is it?  Is the best way to convert money into happiness the act of giving it away?  It seems clear that at least for some people the answer is yes.  But the research on this is not conclusive.  So before you give away all of your money . . . or even half . . . maybe donate just a little and see how that feels.   If you like how that feels, give a little more.  And when you’re ready to talk about giving away the really big numbers, give me a call.  I’ll be happy to help you unload it.

Berg, M. & Veenhoven, R. (2010). Income inequality and happiness in 119 nations. In search for an optimum that does not appear to exist. In: Bent Greve (Ed.), Happiness and Social Policy in Europe, Edgar Elgar (in press).

Salwen, K. & Salwen, H. (2010). The Power of Half: One Family’s Decision to Stop Taking and Start Giving Back.  New York: Houghton Mifflin Harcourt.

6 Responses to Trading Money for Happiness