By Jeremy McCarthy on June 29, 2010 in Positive Psychology 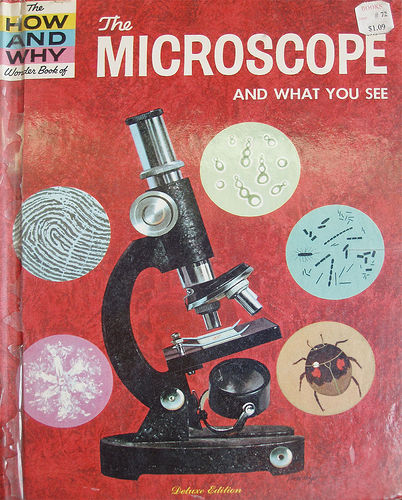 The Microcope Book by Orin Zebest

Last week, I wrote about selecting a book for my mother-in-law who was visiting from France (btw, this has nothing to do with this post, but mother-in-law in France is known as the “belle mere” or “beautiful mother.”  This is so much nicer than calling her an “in-law” which is like saying, “she’s only my mother because of a legal contract.”)  Anyway, my “beautiful mother” was trying to choose between 1. “The How of Happiness” by Sonja Lyubomirsky, 2. “The Happiness Project” by Gretchen Rubin, and 3. “The Power of Now” by Eckhart Tolle.

You can read about my recommendations here, but this week I wanted to clarify what I meant when I said that really only one of these books (Lyubomirsky’s “The How of Happiness”) is truly “positive psychology.”  Many people think positive psychology and “positive thinking” or “self help” are the same thing.  But in fact, positive psychology is an actual science, based on actual research, by actual scientists.  Sonja Lyubomirsky, for example, is a psychologist and a professor of psychology at the University of California in Riverside who has spent her career doing randomized placebo controlled trial experiments to better understand the benefits of happiness, why some people are happier than others, and what people can do to get more happiness in their lives.  In most book stores, her book is probably plopped down in the “self-help” section, with no way for the average consumer to realize that unlike the rest of the books, hers is evidence based with research to support her recommendations.

Another example of this is Caroline Miller’s book on goals, “Creating Your Best Life.”  There are tons of books on goal setting, finding your life purpose, and productivity, but Caroline is a MAPP (Master of Applied Positive Psychology) and her book is based on psychological research on goal theory, self-efficacy, mindset, and much more.  Being based on research means that the theories have been tested and found to have a statistically significant positive impact.

In last weeks blog, I argued that science and research are not the only ways to learn and the value of a book should not be solely based on how immersed it is in scientifically validated information.  Most people don’t realize that science rarely proves anything.  Most research is based on testing “null hypotheses” (i.e. scientifically validated interventions are not proven, but they haven’t been disproven yet.)  But language is important.  And people need to understand the difference between the science of positive psychology and the culture of positive thinking.

If you are looking for advice (which presumably is what people are looking for in the self-help section of the book store,) it is good to know which theories have been tested and which ones haven’t.  To give an example, if someone told you that you could flap your arms really hard and fly off of the Brooklyn Bridge, you might want to find out what research has been done before you decide to test it out yourself.  If the advice is bad, the results could be fatal.  On the other hand, if someone tells you picking up a penny brings good luck, it might be worth picking one up if you see one.  There is nothing to lose and in fact, worst case scenario, you’re still up a cent.

We can learn from various sources, but it is important to understand what those sources are, where the information is coming from, and what the motivations behind it are.  And when it comes to getting advice, we should use scientific inquiry to evaluate the possible risks and rewards associated with it.  We shouldn’t close ourselves off to possibilities, but when evidence is available, we should heed its call to truth.

Lyubomirsky, S. (2008). The How of Happiness: A scientific approach to getting the life you want. New York: Penguin Press.

Rubin, G. (2009). The Happiness Project: Or, Why I Spent a Year Trying to Sing in the Morning, Clean My Closets, Fight Right, Read Aristotle, and Generally Have More Fun. New York: Harper.

The Scientist, the Housewife, and the Guru–Science and Possibility Part 1
The Yin and Yang of Intensity and Rest