By Jeremy McCarthy on December 5, 2013 in Facts of Life, Wellbeing in the World of Work 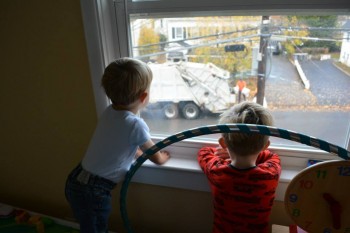 Max and Dylan watch the G-men

My son Dylan is fascinated with garbage men.  He will scream with glee, “The garbage truck is coming!” and rush to the window of the house to watch them load their rubbish into their giant truck.  Sometimes, if we are lucky, we time it right and come out in front of the house just as the garbage collectors arrive.  They always greet us with a smile and a wave and take a few extra minutes to talk to Dylan.

Dylan admires the garbage men.  They are larger-than-life heroes swooping in with their massive truck (basically a giant toy, in Dylan’s eyes) and their bright orange vests.  They seem to own the neighborhood.

And the garbage men also seem to be fairly proud of what they do.  They are quite used to receiving the adoration of the children and seem to relish the opportunity to be outdoors in the early morning hours, while they clean up the neighborhood.

Few of us, however, would choose this career.  Many look down on this kind of labor as menial, or “beneath” them.  Some would be downright revolted by the idea of working in rubbish.

When I teach workshops on meaningful workplaces, I ask people to describe jobs that are inherently meaningful.  Certain responses are consistently given: teacher, doctor, nurse, social worker, or firefighter, sometimes an artist or a craftsman, sometimes an astronaut or a scientist.

Then I ask people to think of what I call “NSM” jobs, or “Not So Meaningful” jobs.  Again there is some consistency in the answers: custodial/janitorial work, sewer workers, bureaucratic office workers (think DMV or IRS in the US), and maybe a manual labor job such as a ditch digger. 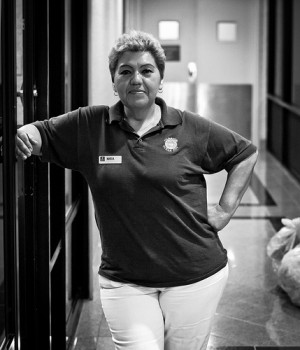 While researchers agree that certain jobs are probably more associated with a sense of meaning than others (this may be in no small part due to the social stigma around certain jobs) they have also found that across any occupation, a wide variety of orientations to work can be found.  In a hospital, for example, some of the custodial staff may view their work as “just a job”—something that they dislike, but do for the money.  While others see their work as a “calling” and feel a deep sense of fulfillment and connection from contributing to the important healing work of the hospital.

Finding meaning in one’s work is not easy, regardless of your profession.  So I think Dylan is right to admire the G-men.  They like what they do, and they do it well.  They are providing a valuable service, getting good exercise, and spending a great deal of time outdoors.  This is better than most of us can say.

And most importantly, Dylan would say, they get to play on the back of that giant truck.

Finding Religion on Thanksgiving Day
The Cure for Golfer’s Elbow