By Jeremy McCarthy on January 8, 2013 in Facts of Life, Positive Psychology 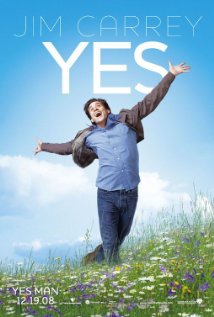 I saw a fun movie last week, called “Yes Man,” about a man (played by Jim Carrey) who turns his life around by saying “yes” to whatever opportunity came along (he had previously been in the habit of saying “no.”)

It reminded me of the most powerful lesson I have learned from my studies in positive psychology, which ironically has nothing to do with the research-based interventions for how to live a better life.  It comes from the way positive psychology came into being.

Historically, most of psychology for the last 50-100 years has been based on Freudian psychology.  And Freud (the father of modern psychology) was of the mindset that most people, deep down, are pretty dark and twisted.  Our minds are filled with all kinds of disturbing thoughts and problems that stem from early childhood.  The only way to overcome these problems is through extensive psychotherapy.

So psychology has focused on categorizing and treating all of the psychological problems that humans can have.  And over the years, the “Diagnostic and Statistical Manual” (DSM) of psychological disorders has grown larger and larger.

But in 1997, Martin Seligman was the president of the American Psychological Association, and he decided that it was time for what I call a “positive flip” to the science.  Seligman felt that psychology had forgotten its purpose, which was “to help people live better lives.”  He proposed that psychology should be as concerned with what goes right with people (strengths, virtues, positive emotions) as it is with what goes wrong with people.  Positive psychology was born.

With the launch and subsequent popularity of positive psychology, I have seen this positive flip spread to other areas.  A group of health professionals for example, is investigating ideas of “positive health”: not how to cure and prevent illness, but understanding and engendering physical flourishing.  “Positive neuroscience” focuses not on understanding neurological disorders but on how positive abilities and experiences are manifested in the brain.  And one of my professors, James Pawelski, has just published a new book on “positive humanities,” balancing the literary traditions of focusing on tragedy and catharsis with a study of eudaimonic wellbeing through literature.

Another example is “Appreciative Inquiry” which is a unique approach taken by certain organizations to learn from their strengths and focus more on doing what they do well.  This is a big departure from the more traditional organizational strategy of “deficit based management” which involves identifying your biggest problems and then focusing resources on how to overcome them.

This “positive flip” opens us up to seemingly obvious solutions that were previously obscured by our natural tendency to focus on the negative (just like Jim Carrey in the movie.)

I think we have only begun to scratch the surface of areas and industries where this positive flip can be applied.

As an example, a couple of weeks ago, I was traveling through JFK when I observed one of the TSA agents employing a markedly different strategy at the security checkpoint.  Rather than enforcing the rules by following the usual script:

“Please remove your computer from your laptop.”

“No fluids are allowed.”

“Take everything out of your pockets.”

He instead focused on commenting on what people were doing well:

“Good job removing your laptop from your bag!”

“Thank you for removing everything from your pockets, that will help expedite things.”

“I see you are removing the liquids from your bag, nicely done!”

I had never heard a TSA agent talking like this so I asked him about it.  It wasn’t anything calculated, there was no strategy behind it, this just happened to be the personality of this particular agent. But seeing him work was a heel-of-hand-to-head, “no-duh” moment that his way was obviously better.  The passengers were happier, the agent was happier, and my guess is that people listened better and would be more compliant.

The amazing thing is the natural pull towards the negative that makes it so hard to find these positive solutions.  When we find them, they seem obvious, and yet it takes a lot of time and conscious effort for us to do this positive flip.

The question becomes, where else could we make improvements by applying the positive flip?  Is there an area of your life, either personally or professionally where you have neglected the positive side of the equation?  Is there somewhere you’ve been saying “no” when you should be saying “yes”?  Try the positive flip and let me know how it goes.

P.S. My course on Positive Leadership in Spas and Hospitality will be starting again on January 21.  The course teaches how to apply this positive flip in business to overcome negativity bias, learn from and use strengths, and create a culture that celebrates success and fosters meaningful work.  If you would like to learn more about the course, please email me: jeremy@psychologyofwellbeing.com.

5 Responses to The Positive Flip