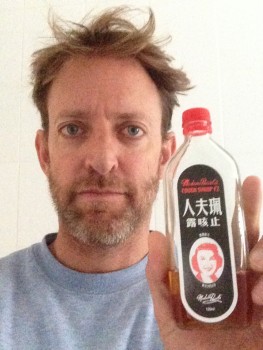 Me and my Madame Pearl’s cough syrup

I wanted to hit the ground running in 2015.  Instead, I feel like I just hit the ground.  I spent the first ten days of the year laid out flat on my back with a fever and a hacking cough.

It is not like me to do literally nothing for a week. Even if I am sick, I will usually muddle through. I rarely go to a doctor. I avoid antibiotics. My typical “get-well strategy” could be called “business-as-usual.”  I might cut back on my activity levels, but I’m not very good at resting completely.

Which is why it’s interesting that my body has ways to force me to rest when my mind is too stubborn. Usually, in my case, this is brought on by a herniated disc. For most of my adult life, I have gone through episodes where my back goes into spasm and I am forced to lay flat for 3-4 days.

I like to think that my back is getting better, and maybe that’s why my body had to go to “Plan B” to slow me down this time: a full-blown flu with fever, aches from head-to-toe (even my hair hurt), and a cough so bad and so malingering that my doctor thought I might have pneumonia.

This idea that “this is your body’s way of telling you that you need to slow down” is the kind of new-ageism that I usually cringe at. It’s a convenient way of describing something bad in a way that feels comforting and like it has some meaning to it (never mind that it would be hard to validate scientifically.) But it certainly feels true. With the benefit of hindsight, I always feel like I could have avoided these health setbacks with proper rest and recovery time (both mentally and physically.)

One doctor who (somewhat controversially) promotes this idea is Dr. John Sarno, author of Mind Over Back Pain and Healing Back Pain: The Mind-Body Connection. Dr. Sarno’s idea is that back pain is most often caused by the mind as “an unconscious ‘distraction’ to aid in the repression of deep unconscious emotional issues” (Wikipedia.) If you fix your back (with physical therapy, let’s say) without addressing the underlying psychological problems, then the pain will just pop up somewhere else (maybe in my case as the flu.)

Even critics of Dr. Sarno’s work agree that the pain research shows pain to be more brain/nervous system related than to physical structures such as herniated discs. But critics don’t agree that pain is always about emotional issues. Massage therapist and pain blogger (OK, he would probably prefer “movement blogger”) Todd Hargrove says, “the purpose of pain is to encourage you to take action to prevent or heal harm to the body.” 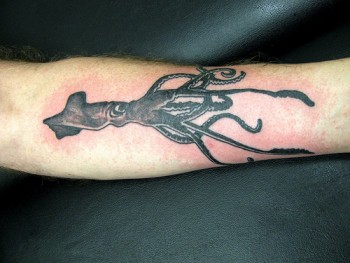 An interesting new study on squid (yes, squid) gives some additional insights into the purpose of pain. Researchers noticed that squid that had one of their many tentacles bitten off by a fish exhibited more vigilance and defensive behaviors than their un-injured tank-mates. The presumed pain of their  injury motivated behavior changes that boosted their survival potential.

Either way, suffice it to say that, in my case, the lesson has been learned. As I return to health (finally!) I move into the New Year a little more tentative and a little more vigilant about my own wellbeing.

mind-body pain connection, pain and behavior change, the purpose of pain, why we hurt

How to be a Good Listener
How the Internet is Making us Stronger, Faster and Fitter

5 Responses to A Painful Start to the New Year