By Jeremy McCarthy on July 10, 2012 in Book Reviews, Positive Psychology, Psychology of Spas and Wellbeing 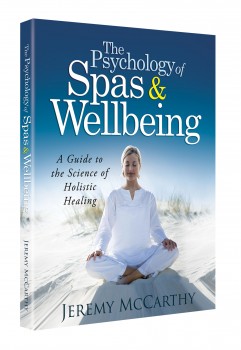 The Psychology of Spas & Wellbeing

Yesterday was the launch of my new book on The Psychology of Spas & Wellbeing.  For those who don’t know, I work in the spa industry and a lot of my research in psychology is driven by trying to understand how we can create holistic wellbeing experiences for guests in a spa setting.  In a typical spa visit, there are many things happening simultaneously, not all of them physical, which makes it difficult to scientifically explain exactly what parts of the experience have a direct impact on wellbeing.

When a guest goes to a spa, they are not only receiving a treatment.  They are also separating themselves from technology, spending time in silence, and being touched by a nurturing healer.  All of these things add to the physical application of the therapy to create an overall experience for the customer.

To give an example, the effect of the nurturing healer is important, and it is the reason that an automatic massage chair (like the kind you might see at Sharper Image), although enjoyable, cannot seem to duplicate or replace the experience of actually being touched by a human being.

In my book, I cite research on the power of human touch and other healing effects that can only be brought by another human being.  There is also a great compilation of research on this in A Cry Unheard: New Insights into the Medical Consequences of Loneliness by mind-body medical expert, James Lynch.  (Special thanks to Dr. Brent Bauer, the director of complementary and alternative medicine for the Mayo Clinic and the medical advisor to the International Spa Association, for giving me this book.) 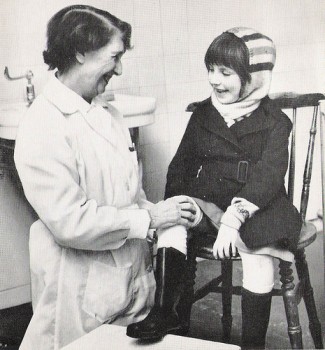 Working Children's Home by their history

The “effect of person” was originally discovered in Pavlovian research on dogs in the 1960s (Anderson & Gantt, 1966). The presence of a researcher in the room with the dog had a calming effect.  Their heart rate did not go up as quickly, and returned to normal much sooner whenever there was a person in the room.

There is also research suggesting the presence of a person can have “marked effects on the heart rate of another person” (Whitehorn, Kaufman & Thomas, 1935 as cited in Gantt, Newton, Royer & Stephens, 1966, p. 31). Darwin, for example, once described a heart patient with an irregular pulse rate which “invariably became regular as soon as my Father entered the room” (Gantt, Newton, Royer & Stephens, 1966, p. 32).  Another doctor wrote of his amazement as a dying patient’s heart rate and heart rhythm changed “just as soon as a nurse began to hold his hand shortly before his death” (p. 213).  What amazed him was that his patient was in a deep coma and should have been completely unaware of the presence of the nurse. 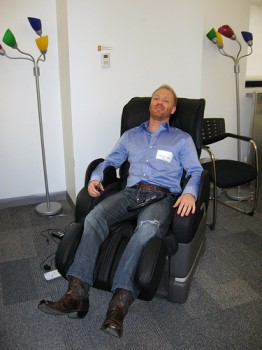 A new piece of research studied this effect of person in an interesting way.   Researchers compared two groups of people having identical massages delivered by an electric massage pad in an easy chair.  In one group, the massage was started automatically by a computer.  In the other group, a human being flipped the switch.

I should clarify that I actually think some of the massage chairs on the market are pretty amazing.  And they do deliver a great massage.  But there is just no substitute for humans healing humans through touch.

4 Responses to The Effect of Person