By Jeremy McCarthy on January 18, 2011 in Making a Better World, On Relating and Relationships, Positive Psychology 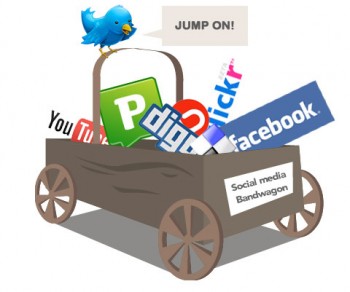 Jump on the Social Media Bandwagon by Matt Hamm

Last year was a year of focusing on the new social media channels, but it seems we have been more focused on the “media” than we have on the “social.”  The buzz for the past year has been on which are the right channels to play in, how to develop your “presence” in social media, and what are the secret tips for getting more fans, friends and followers.

But what if we thought about social media, not as a business/marketing tool to be exploited, but as a next step in the evolution of the human species?  What if we focused not on the technology, but on the human need to connect, to share and learn from one another, to collaborate with one another?  How would we use the tools we have with that mindset?

I’m a big fan of Gary Vaynerchuk precisely because he has this mentality.  “@garyvee” (in case you have been living under a rock and don’t know who he is,) became an internet sensation with his video blog on wines and has since become a highly sought after media and marketing consultant.  In his best selling book, “Crush It,” he outlines two very simple principles for success:  1. work hard (“hustle” as he says,) and 2. care about people.

If you ask Gary what is the best social media platform to be in, he will tell you it doesn’t matter.  It’s about connecting with people wherever they are . . . and people are on the internet.  Whether you try to get on every social media site you can, or pick one that you can manage, it’s about reaching out and engaging with people (and authentically caring about them.)  I’ve already pre-ordered his next book, “The Thank You Economy,” which talks about a new marketplace “based on open, honest and constant communication between customers and business.”

“Social Nation,” is another recently published book that addresses the importance of our increasingly social culture, especially for business.  According to author Barry Libert, “business is personal” and he teaches open authentic relationships as the key to being a successful “social leader.”  He tells businesses to relinquish control, in favor of more collaborative exchanges with employees and customers.

Libert, who is the CEO of Mzinga, a company that develops social media software platforms for businesses, doesn’t use his software to try and manipulate or game the social media space for business advantage.  Instead, he teaches people to be truly social, even in the business space.  This means thinking about the needs of customers and employees and helping them to achieve their goals.  It means creating workplaces where people can be who they are and feel a part of a sense of community, like Analytical Graphics, allowing employees to do their laundry while at work, or Zappos, quizzing employees on how well they know their colleagues each time they turn on their computers.

If 2010 was the year of figuring out how to use social media to drive revenues and attract customers, I hope 2011 will be the year of figuring out how to really bring people together and how to use business to authentically contribute to society.  If corporate America is not ready for that yet, at least I think we are taking steps in the right direction.

Libert, B. (2010).  Social Nation: How to Harness the Power of Social Media to Attract Customers, Motivate Employees, and Grow Your Business.  Wiley.

Vaynerchuk, G. (in press).  The Thank You Economy.

The Happiness Diet: The Power of Positivity for Weight Loss
Exercising Your Moral Muscles

11 Responses to Putting the Social back in Social Media