By Jeremy McCarthy on February 15, 2011 in Facts of Life, On Relating and Relationships, Parenting and Wellbeing 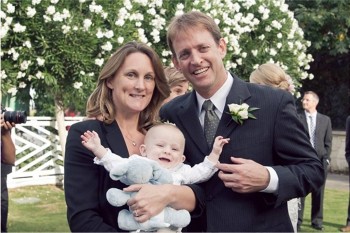 Dylan, Catherine and I

“First comes love, then comes marriage, then comes the baby in the baby carriage.”  From the time we are ten years old, we learn that this is the way things are supposed to go.  But it doesn’t always work out that way.  For some people, the baby comes first.

At the end of February, I’ll be getting married to Catherine, my girlfriend of the last four and a half years, and Dylan, our 9 month old son, will be walking down the aisle with us.  To be fair, Catherine and I were completely in love with each other before Dylan came along, but I didn’t really see the need to get married until after Catherine was pregnant.

It’s not like I was a commitment-phobe.  In fact I’ve always preferred monogamous relationships to the freewheeling lifestyle of a true bachelor.  But I’ve always felt that there was no point in getting married unless you were having a child.  I believe that people change a lot over the course of their lifetime (I certainly have) and you can’t possibly know how you and your partner will change (or if you will change in the same direction,) and so the idea of pledging a lifelong commitment to someone when you have no idea who they will become seems kind of silly.  (Okay, and maybe growing up with divorced parents had something to do with it too.)

I am not alone in this–marriage in general is not nearly as popular as it once was.  4 out of 10 people now think marriage is obsolete (up from 28% in a Time Magazine survey in 1978—see the Pew Study “The Decline of Marriage and the Rise of New Families.”)   But once Catherine became pregnant, I knew that we would be connected to each other forever, and a pledge of lifelong commitment seemed like the only natural thing to do.  Besides, it was the perfect excuse to gather all our friends and family together in Mexico and have a huge party (next week!)

Having the baby come before the marriage, has certainly led to some awkwardness in bucking against societal trends and expectations (I hate introducing Catherine as my fiancée when I feel like she has been my wife since the moment Dylan was born) but the more I think about it, the more I think there are some advantages to getting married after your first child is born.

1.  Commitment first, then love.  Some experts say the reason most relationships fail is because people get so swayed by feelings of passion and love that they assume this is all they need to have a successful relationship (and they are literally heartbroken when they learn it is not.)  Proponents of arranged marriages (which have surprisingly high success rates) say it is easier to grow love once you have commitment than the other way around.  In fact, the idea that marriage is based entirely on love is relatively new in human history (see “Arranged Marriages – Past and Present.”)

Having a baby before marriage is not the same as an arranged marriage, but it establishes a union based first and foremost on commitment and trust.  While most people rate love, lifelong commitment and companionship as more important reasons for getting married, both married and unmarried people rate being a good parent as the most important quality they look for in a spouse (from the Pew study.)  Having an opportunity to see what Catherine is like as a mother to our son makes me fall even more deeply in love with her as we begin our married life together.

2.  Sharing novel experiences builds intimacy.  Relationship experts say sharing exciting experiences is a way to grow closer as a couple.  For Catherine and me, going through a pregnancy and then a childbirth both tested our relationship and brought us closer together in ways that we could not have possibly imagined (see my article, “Why is Childbirth so Freakin’ Painful?”)  Some couples suffer under the strain of this major life transition.  The fact that we have shared this life-altering experience together and grown closer gives us confidence that we are truly right for each other.

3.  You avoid the drop in marital satisfaction that comes from having children.  In “Stumbling on Happiness,” Daniel Gilbert featured a chart entitled “The Most Terrifying Chart Imaginable for a New Parent” (also featured at 11:51 minutes into this wonderful TED 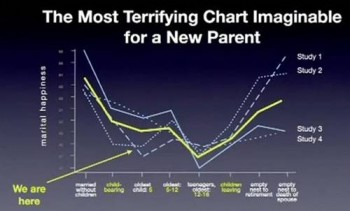 talk on “Taboos of Parenting”) which showed the startling plunge in marital happiness that occurs for couples while raising their children.  An eight-year study of 218 couples found that 90 percent experienced a decrease in marital satisfaction once the first child was born (See “Kids Curb Marital Satisfaction” and “Marital Stability Throughout the Child-Rearing Years.”)  In that sense, Catherine and I are starting our married life on the ground floor (except for the predicted dip into the basement during our son’s teenage years.)

I realize that this article will rub some people the wrong way.  There are strong arguments for only bringing children into stabilized, committed families (although statistics show a good number of those families will fall apart anyway.)  And some people will have religious beliefs that make the idea of children out of wedlock seem like a transgression against God.  But my point is that life has a way of rolling along and it doesn’t always conform to the rules and customs that we try to create either culturally or religiously.  Sometimes the baby comes first.  And it can be a good, good thing.

What’s Love Got to Do With It? (Spas as a Surrogate for Love)
In a Wedding, Other People Matter

17 Responses to When Baby Comes First