By Jeremy McCarthy on December 13, 2011 in Making a Better World, Mind-Body, Psychology of Spas and Wellbeing 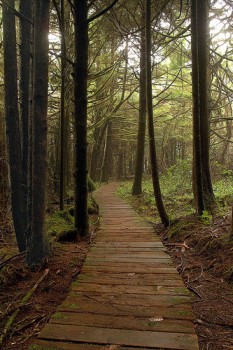 I used to live in Hawaii, on the island of Maui.  At least once a month, I would drive a few hours on the winding road around the island and spend a day or two hiking and camping in the rain forest.  I would follow a trail, or make my own, weaving through bamboo forests littered with guava fruit and fragrant awapuhi flowers.  Eventually, I would find a hidden waterfall where I would swim gleefully before making my way back through the forest.  I would come away from these excursions feeling completely revived and refreshed, with a new perspective on life and a deep connection to the planet.

“Shinrin-yoku” is a Japanese term that translates as “forest bathing” and describes immersing oneself in a forest environment in order to experience the healing effects of Mother Nature at her best.  According to Wikipedia, the concept of forest bathing as an important component of a healthy lifestyle was first introduced in 1982 by the “Forest Agency of Japan.”  But what started as a good marketing campaign to induce tourism to Japan’s natural parks, has actually become a widely embraced wellness strategy in Japan, and one that is getting greater attention by researchers.

“There’s magic in the air,” is one way you could describe the believed benefits of forest bathing, since it is believed that the trees themselves emit natural aromatherapeutic benefits from the essential oils in the woods that are inhaled over an extended period (“Phytoncides” according to one New York Times article.)

One research article cites a study done in the Sierra Nevada of California that discovered over 120 different chemical compounds in Forest air, only 70 of which could be identified.  They cautioned that “when we lose our forests, we don’t know what we are losing.”

Another group of researchers say health benefits from the natural environment are to be expected considering that the industrial revolution and subsequent urbanization represents only a blip in the vast span of man’s history on Earth.  We have lived in nature for 99.99% of the past 5 million years, so it is only natural that “all human physiological functions have evolved in and adapted to the natural environment.”

In their study, students who were asked to spend some time wandering around the forest and then sitting and watching the landscape felt calmer and showed physiological indicators (salivary cortisol, prefrontal hemoglobin) of lower stress levels, than students who did the same in an urban environment.

These are important findings considering that urbanization is one of the biggest trends facing the planet today, particularly with the development of emerging markets such as India and China. Some estimate that China’s urban population will swell to 1 billion people in the next two decades with over 200 cities with 1,000,000+ inhabitants.

Along with this trend towards urbanization, I expect to see a trend towards innovation around bringing plant life into urban environments through parks, nature preserves, rooftop gardens or other urban gardens, and vertical gardens or plant walls (like we are now featuring in select Westin Hotels.)  We also may see more community involvement in protecting green spaces, such as GreenThumb in New York, which claims to be “the largest community gardening program in the nation.”

In spite of my adventures in the rainforests of Hawaii, I had never heard of the term “forest bathing” before stumbling on the research mentioned above.  But now that I’ve learned about it, I plan to use it and promote it.  This concept goes beyond recognizing the health and oxygenating benefits of plant life.  “Forest bathing” implies a need for total immersion in nature and a complete escape from an urban environment, at least from time to time.

Unlike my life in Maui, here in New York it is not likely that I will find a tropical rainforest replete with hidden waterfalls in my backyard.  But Sterling Forest is not too far away . . . and I could use a forest bath.

17 Responses to Trend Alert: The Health Benefits of Forest Bathing