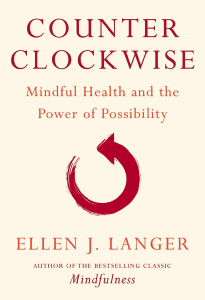 “Counterclockwise” was the name given to a research study from the 1970s (and later a book by the same name) by psychologist Ellen Langer in which she tries to turn the clock back for her research subjects.  The subjects (a group of men in their 70s and 80s) were invited to a retreat where they were instructed to “act as if” it were 20 years earlier.  The retreat was established to take them back in time, featuring only furnishings, clothing, magazines, and TV shows from the 50s.

While at the retreat, the participants were instructed to speak in the present tense about their lives (their families, their careers, themselves) from 20 years earlier and were told not to mention anything that had happened after 1959.   Meanwhile, a control group was sent away to a retreat and instructed to “reminisce” about their lives of 20 years ago.

For the group that fully immersed themselves in the past, “acting as if” they were 20 years younger, the results were remarkable.  After only one week, the participants not only felt younger, they actually showed biological effects of age reversal.  Hearing, eyesight, memory, dexterity and appetite all improved.

I was thinking about this study when I recently brought my family away for a spa retreat (to Aji Spa at The Sheraton Wild Horse Pass.) I decided to duplicate (in a small way) an aspect of this experiment, so I brought a bunch of old iconic family photos from the 50s (when my mom and uncle were kids) and the 70s (when my brother and I were kids) and surprised everyone by telling them that we were going to recreate them. 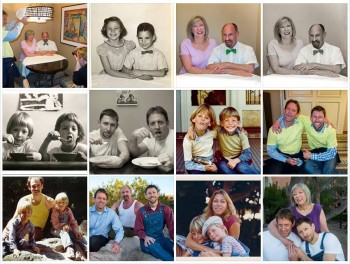 I had seen this done before (to great effect) on websites such as this one and I thought it would be a fun interactive activity for us to do together.  Unbeknownst to everyone else, I spent a few weeks prior to the trip selecting and printing out old photos and scouring thrift shops for the necessary wardrobe items.

I can’t say for sure that these moments we spent placing ourselves into outfits and poses from our youth actually reversed our signs of aging.  But I was pleasantly surprised with how everyone embraced the activity and how much everyone enjoyed it.  At the very least, it was a great way for us to spend some quality time together as a family, laughing and playing “dress up.”

The reason the Langer version of the counterclockwise experiment works is because she took people out of their normal thought patterns.  Through the thoughts and beliefs we have about aging, we can literally think ourselves old.  If we can replace these thought patterns with ones from a younger version of ourselves we can feel rejuvenated (or even “be” rejuvenated in the physiological sense.)

Naturally, my little family photo shoot experiment could not have the same effect as a week-long retreat into the past.  But I like to think that maybe, for a few brief hours last weekend, we all thought ourselves just little bit younger.

4 Responses to Then and Now: Going Counterclockwise to Reverse Aging