By Jeremy McCarthy on September 11, 2012 in Book Reviews, On Relating and Relationships, Parenting and Wellbeing 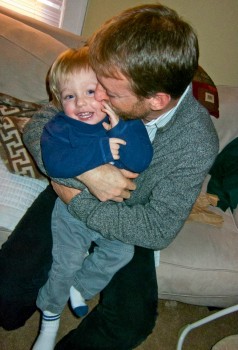 The other day I yelled at my 2-year-old son Dylan after one of his wooden blocks bounced off my forehead, narrowly missing my eye. “NO!,” I shouted.  “You DO NOT throw things!”

I thought I was being as clear and direct as possible, but if I put myself in young Dylan’s shoes, this is not clear at all.  Only the day before I was congratulating Dylan for throwing me a ball in the park, so clearly, sometimes it is OK to throw things and sometimes it isn’t.

In fact, the rules around throwing things are fairly complex: Throwing hard things seems to be worse than throwing soft things.  Throwing things at people is not good when they are not expecting it but OK if you are engaged in a game of catch.  Some things are OK to throw outside but not in the house.  You shouldn’t throw rocks at cars but it is OK to throw them into a lake.  Sand at the beach shouldn’t be thrown at people or onto peoples’ blankets but is OK if no one is around, etc. etc. etc.

As a parent, even if I wanted to be crystal clear in my communication, it is virtually impossible to verbally convey all of the subtle contextual cues that determine whether throwing is appropriate or not.  And so Dylan has no choice but to experiment—to test the boundaries—by throwing things over and over again until he learns all the rules (insert exasperated parental sigh here.)

Even a seemingly black-and-white rule, such as “no hitting” has contextual variability.  If Dylan smacks his younger brother in the face, he gets yelled at, but if he gently pats him on the back, he is told he is being sweet.  For Dylan, there is a wide gray area between these two that will have to be explored and tested.  Hitting someone in the face is not so good, but it’s ok to hit someone’s hand when they say “give me five!”  Banging on a toy drum with a stick is allowed, but banging on the television or your younger brother’s head is taboo.

It is easy for parents to become frustrated with a child for not “following the rules,” but when you look at the contextual landscape surrounding each rule, you realize that toddlers have their work cut out for them. 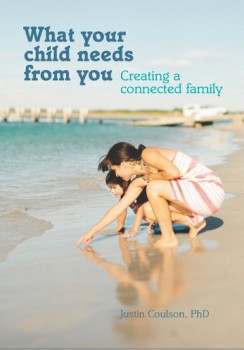 What Your Child Needs by Justin Coulson

One of the best books I’ve seen on the complexities of parenting is “What Your Child Needs From You: Creating a Connected Family” by parenting expert, Dr. Justin Coulson.  At less than 80 pages, it’s an easy read for the time-starved parent, but it gets at the essence of the parental relationship, and doesn’t shy away from the contextual nuances and challenges that can be a part of any interaction.

With respect to discipline, Coulson reminds people there are two important aspects to consider:  the behavior you want the child to create AND the reason you want the child to have for adopting the behavior.  I.e. do we want to raise children that learn to “follow the rules” and unquestioningly bow to authority?  Or do we want to raise children that internalize good behavior because they have a strong set of values and a good understanding of the contextual landscape they are attempting to navigate?

One of the techniques that Coulson recommends is “induction” and he uses an example of a two-year-old boy stabbing his older brother in the face with a fork (and I thought the block hurt!)  The understandably natural reaction of the father was to yell at the child and enforce a “time-out”.

Induction is the process of teaching the expectations that we have of a child.  But Coulson realizes that simply explaining the rules and meting out punishment can be confusing to a child this age.  The best way to create a teachable moment is to get the child talking about what happened so the new rules and guidelines become internalized rather than enforced from without.

So rather than handing down parental commandments, I’m looking for the teachable moments on context.  “Dylan, can you tell me why Daddy got angry when you bounced one of your blocks off of his forehead?”

Coulson’s book is all about emotional availability.  Children, more than anything, need to be heard.  Even when we think there is a lesson they need to learn.

Coulson, J. (2012).  What Your Child Needs From You: Creating a Connected Family.  ACER Press.

5 Responses to The Subtle Art of Contextual Parenting