By Jeremy McCarthy on August 17, 2010 in Mind-Body, Positive Psychology, Wellbeing in the World of Work 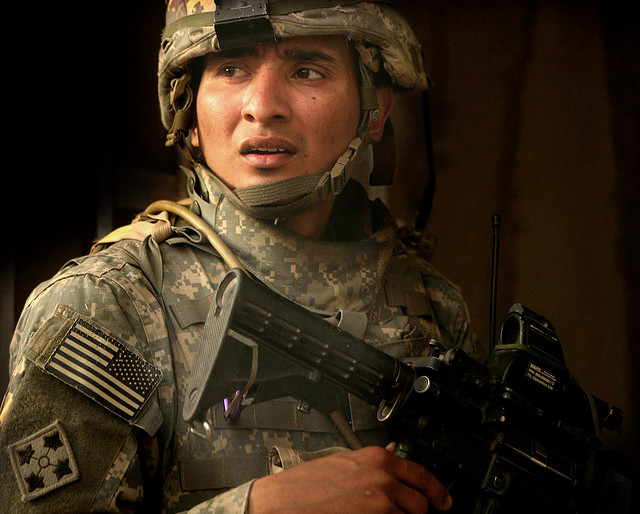 Comprehensive Soldier Fitness is the Army’s new training program that uses positive psychology to teach soldiers mental resilience strategies to maintain their psychological wellbeing while confronting the challenges of being separated from families, regularly facing conflict, and losing friends and colleagues.

The program, which calls for an army of “balanced, healthy, self-confident soldiers” and “improved soldier fitness and readiness,” sounds like a good plan to take care of our warriors’ mental health and to take a more holistic approach to toughening them up.  But recently, the program has come under some criticism, primarily for its publicly funded price tag ($117 million as reported in the New York Times) and for ethical questions about whether or not soldiers even should be trained to be desensitized to traumatic events.  Psychologist Bruce Levine recently published an article entitled, “How Psychologists Profit from Unending U.S. Wars,” (published elsewhere as “American Soldiers Brainwashed with ‘Positive Thinking’”,) condemning the program and pointing the finger at psychologists who are pocketing their fair share of the money for training 40,000 drill sergeants (who in turn will train 1.1 million U.S. soldiers.)

Some of Levine’s criticisms I agree with: “Psychologists should loudly warn politicians, military brass, and the nation that if soldiers and veterans discover that they have been deceived about the meaningfulness and necessity of their mission, it is only human for them to become more prone to emotional turmoil, which can lead to destructive behaviors for themselves and others.”  In general, I am a believer that there is usually a peaceful resolution to most conflict and that the U.S. policies tend to emphasize war, rather than negotiation, cooperation and collaboration to resolve issues.  So I don’t like the idea of any program designed to make war easier.

I also am not against criticizing the cost of the program, since I think most of the money we spend on our military efforts could probably be put to better use.  But I question whether the blame should be levied against the psychologists rather than the Army itself.  Our whole society is based on the capitalist ideals of creating services that people need and want in exchange for money.  While we understand that people sell computers and cars for profit, we tend to label as greedy anyone who sells loftier services in the domains of psychological or spiritual wellbeing.  I say, “hate the game, not the players.”

I have heard directly from Martin Seligman, the brains behind the program (and behind positive psychology for that matter) and Karen Reivich, the author of The Resilience Factor and one of the lead trainers for the Army workshops, and their intentions are in the right place.  This program is based on the idea that reactions to traumatic events are normally distributed. This means that after experiencing a major traumatic event, a small percentage of people will experience psychological problems such as depression and Post Traumatic Stress Disorder (PTSD,) most people will adapt and bounce back, and another percentage of people will actually learn and grow from the experience (“Post Traumatic Growth”—see Washington Post article, “From Wounds, Inner Strength”.)  To me, a program designed to decrease PTSD and increase Post Traumatic Growth in our warriors seems like a worthwhile endeavor.  Especially when you consider the lasting impact of PTSD on a community (see recent study, “’Path of mental illness’ follows path of war, twenty years after conflict ends.”)

In Levine’s critique of the program he asks, “How much sense does it make to teach soldiers who are trying to stay alive in a war zone to put a positive spin on everything?”  Here, Levine makes the same mistake as other critics of positive psychology in that he confounds positive psychology with positive thinking—not the same things.  Does it make sense to teach soldiers to be happy at all times at all costs?  Absolutely not.  But how much sense does it make to teach soldiers how to let go of emotional issues and traps that might be distracting them from the tasks at hand?  Quite a lot actually, according to Brigadier General Rhonda Cornum who heads up the program for the Army.  In a recent interview, she described the difference between a realistic response and a catastrophic response to losing a friend in battle: “Realistically, we expect that people will grieve, that they will feel anger, they will probably feel bitterness and recurring grief . . . but you can’t just stay there and replay that over and over.”  Teaching soldiers techniques for managing the stress and anxiety of warfare may even be saving their lives.  One recent study showed that soldiers’ reactions to stress in dangerous combat actually cause them “to dissociate from threats [in battle] instead of becoming more vigilant.”

Furthermore, the program is not just about helping soldiers deal with the severe emotional traumas they encounter on the battle field.  It helps them to deal with the emotional issues surrounding their relationships, not only with their fellow soldiers, but with their families back home (some parts of the program are even being offered to family members.)  Thanks to cellphones and the internet, soldiers are more connected than ever before to the people back home.  And while I’m sure the soldiers appreciate this connectivity, it makes it harder than ever to remain detached and focused on their difficult job overseas.  Gone are the days of soldiers carrying around a single photograph of their spouse or child, as the only reminder of their life back home.  Today, they are more in touch than ever before, and there are emotional costs associated with that.

At the end of the day General Cornum is a manager of people (in one of the largest organizations in the world) and she is hoping that positive psychology training will improve performance in her workforce.  Other businesses (see my articles on Zappos here and here) are doing the same.  Dan Bowling, former head of HR for Coca Cola and a MAPP colleague of mine, is looking at how similar kinds of training could impact lawyers (another workforce prone to emotional issues).  And I have been working on new training programs applying positive psychology to the hospitality industry (appropriate since relationships and emotional connections are so important in our business.)

On a recent phone call that Martin Seligman had with the MAPP Alumni, I asked him if there were lessons being learned from the Army training that could be applied in other organizations.  “This is the second largest corporation in the world,” he said.  (The first is Walmart.)  “And so a program that involves training for the entire U.S. Army in which its effects on performance are being evaluated should be highly relevant to large corporations.”  When so many organizations today are still not thinking about the holistic welfare of their workforce, I commend the Army for leading us into this new frontier.

The Hospital of the Future is more like a Hotel
Yoga, Mindfulness, and Great Sex