By Jeremy McCarthy on March 14, 2015 in Book Reviews, Facts of Life 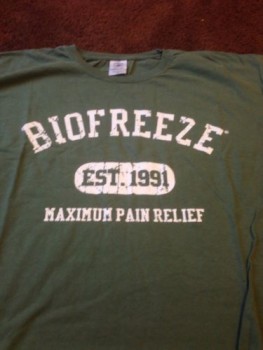 On a recent family vacation, I arrived to Bali wearing a green t-shirt with the “Biofreeze” trademark emblazoned across the chest. It was one of six t-shirts I had brought on the journey with the intention of leaving them behind at the end of the trip.

To be clear, there was nothing wrong with the Biofreeze t-shirt. It was brand new (I received it for free at a recent spa conference and the flight to Bali was the first time I had worn it.) It was made of comfortable, high-quality cotton, was a pleasing green color, and who wouldn’t want to promote the brand’s tag line adorning the bottom of the shirt: “Maximum Pain Relief.” But as nice as this t-shirt was, I had at least 40 other quality t-shirts in my drawers at home and I see vacations as a perfect opportunity to purge the excess.

The logic is simple. If I’m going to get rid of my stuff, I might as well get some benefit out of it. And having a lighter suitcase on my way home is a pretty nice perk. In a poorer country, like Indonesia, I also imagine my discards will be put to good use (I like to picture some hotel housekeeper bringing my t-shirts home to her husband, who is overjoyed to have a new Biofreeze t-shirt.) This warm fuzzy feeling alone should be worth the loss of a t-shirt I don’t really need.

But interestingly, in spite of this clear logic, when the moment of truth came, it was hard to part with the t-shirt. As I zipped up my suitcase, a pile of discarded t-shirts on the floor with a note for the housekeeper, a little voice nagged at me: “But this shirt is brand new” . . . “Maybe you’ll need something to wear the next time you paint your house” . . . “This was a gift from Biofreeze, how would it make them feel???” 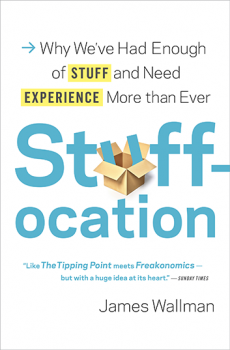 According to James Wallman, the author of a new book on material consumption, we are evolutionarily programmed to cling to stuff. In times of scarcity, this desire for material goods had a real survival benefit. But in the current age of abundance, this evolutionary holdover is causing us all to drown in our own glut. His book is called “Stuffocation” to describe how our hoarding tendencies are clogging up our lives. The price we pay, in time, energy and stress, is as insidious as it is pervasive.

There are “minimalists” out there who have broken free from this paradigm. I count donating six t-shirts to a third-world country as a major victory, but imagine people like Tammy Strobel, who went from being a typical materialist suburban housewife to eventually whittling her belongings down to a mere 69 items, and moving her family into a tiny 150 square feet apartment. Or Ryan Nicodemus, who packed up all of his belongings in boxes, only withdrawing what was needed to see if having fewer possessions would help him find more peace (it did, and after the first 10 days of fishing out necessities he never unpacked the rest of the boxes.) Or Dave Bruno, a blogger who started the 100 Thing Challenge, inviting people to set a limit on the number of possessions they own.

Wallman tells the stories of these minimalists in his book, but doesn’t go so far as to say that minimalism is the solution that will save the world from stuffocation. After all, not everyone has the discipline to live the minimalist lifestyle, and if they did, the economy would probably suffer.

The solution, according to Wallman, is not minimalism, but experientialism. We can still spend our money, but more on experiences (like events, vacations, and education) and less on stuff. And we can still buy stuff, but rather than stocking up on designer clothing, jewelry and artwork, we should buy snowboards, climbing gear, and bicycles. As Wallman says, “you can’t have the experiences without the stuff.”

This resonated with me, because I am the quintessential experientialist consumer (Wallman’s book includes an assessment to determine how experientialist you are and I go off the chart.) I realized this earlier in my life, when I moved to Mexico and all of my stuff took 3 months to arrive. After 3 months of having no stuff, the only things that I missed having were my surfboards, my scuba gear and my volleyball.

For those who don’t want to buy more stuff, even if it brings experiences, there is another option. You can also create experiences around the stuff you have. Like bringing a Biofreeze t-shirt to Indonesia, and then writing an article about it.

Wallman, J. (2015). Stuffocation: Why We’ve Had Enough of Stuff and Need Experience More Than Ever. Spiegel & Grau.

Special thanks to Biofreeze (http://www.biofreeze.com/) for the t-shirt. (My Balinese housekeeper thanks you too!)

Movement and Stillness
Talking to Kids During Tough Times

6 Responses to Drowning in Stuff