By Jeremy McCarthy on June 28, 2011 in Facts of Life, Positive Psychology 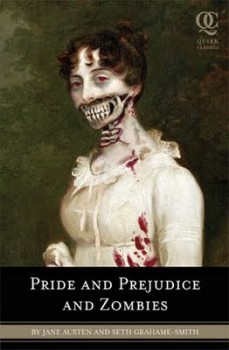 Everybody loves zombies.  Or at least it sometimes seems that way considering the strong foothold they have taken on popular American culture.  Zombies have been a staple of popular films (Wikipedia offers a comprehensive list of them here.)  Jonathan Coulton had a great song about corporate zombies that had some viral popularity (chorus: “all we want to do is eat your brains; we’re not unreasonable, I mean, no one’s going to eat your eyes.”) And zombies seem to be replacing vampires and werewolves as the popular subject of books.  One (surprisingly) successful book, “Pride and Prejudice and Zombies” (a liberally modified adaptation to an old classic,) has been translated into a video game, a graphic novel and soon to be a major motion picture.

In some ways, it is hard to understand this fascination with zombies.  They really are not very impressive compared to their other undead counterparts from the realm of mythical monsters.  They don’t have any strength, speed, or superhuman capabilities like vampires and werewolves do.  They really don’t have any weapons at all other than maybe a few teeth left in their rotting mouth, or a bloody stump where their hand used to be.

What is scary about zombies is the fact that they never give up.  They just keep lumbering forward and don’t let anything stop them from reaching their goal (usually live human flesh, but who am I to judge?)  Zombies are relentless in their pursuit and seem to overcome any obstacle that gets in their way (including bullets, stab wounds or missing limbs.)  What makes zombies special is the power of their perseverance.

Another example of a tenacious undead character from popular culture is “The Terminator” from the series of films made famous by Arnold Schwarzenegger.  In this case, the cyborg does have superhuman powers.  But the most terrifying aspect of being pursued by the Terminator is neither his weaponry nor his strength.  It is his persistence.

When Kyle Reese, the hero of the first film, comes back from the future to rescue Sarah Connor, he warns the police psychologist,

“You still don’t get it, do you? He’ll find her! That’s what he does! That’s ALL he does! You can’t stop him! He’ll wade through you, reach down her throat and pull her fuckin’ heart out!”

Later in the film he tells Sarah Connor,

“That terminator is out there. It can’t be bargained with. It can’t be reasoned with. It doesn’t feel pity, or remorse, or fear. And it absolutely will not stop, ever, until you are dead.” (IMDB)

It’s not his superhuman strength nor his technologically enhanced tracking skills we fear, it’s his relentlessness.

Research by Angela Duckworth suggests that perseverance can be a powerful resource, not only for zombies and cyborgs, but also for regular living people like you and me.  Duckworth began to study “grit” when she realized that a common characteristic among hugely successful people from a variety of fields was a “tenacious dogged determination” that kept them working towards their long term goals.

Her research with West Point military academy cadets, for example, found that “grit” was actually a better determinant of who would make it through the tough training than the other measurements that the military had previously used.

Her research on National Spelling Bee participants found that the grittier contestants were also more successful (by virtue of more hours of practice.) Like the zombies, more perseverant people simply outlast their more talented but less gritty colleagues.  They will work harder and longer until their goals have been reached.

So the next time you curl up on the sofa to watch undead creatures from hell relentlessly pursue their prey, you can be terrified by their evil intentions, you can be repulsed by their rotting flesh, and you can cheer for the heroes as they try to escape. But you should also admire their tenacity.  Do you have long term goals that you hope and dream of accomplishing?  If you do, you just might benefit from having a zombie as a role model.

The idea for this post was inspired by Joel Richards on the Friends of Positive Psychology list serv.  Thanks Joel!

12 Responses to The Positive Psychology of Zombies: The Power of Perseverance