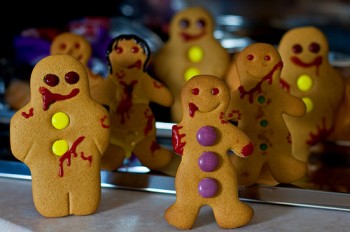 Recently I wrote an article on the positive psychology of zombies, and I immediately realized that I was only telling half the story.  I argued that the popularity and appeal of zombies was due to their perseverance.  Unlike other mythical horror creatures, the zombies do not have super human powers or weapons to destroy their prey, it is their persistence and relentlessness towards their victim that is so terrifying.

But perseverance is not the only positive psychology lesson that we can learn from our undead friends.  While it might be a bit much to argue that zombies are social creatures, they do demonstrate the power of having a large social network.  Not only are zombies incredibly persistent in the pursuit of their goals, but they also find strength in numbers.

The fact that zombies are able to recruit hordes of their undead buddies to help them in their quest for live human flesh makes them much more powerful and terrifying.  If only one zombie was chasing you, you could probably slowly back over it with your car, set the emergency brake, and leave the zombie safely pinned underneath.  But as we learn from any zombie movie, when one zombie turns into ten and ten turns into 100, it becomes almost impossible to fend them off.

I’m currently reading Tribal Leadership by Dave Logan, John King and Halee-Fischer-Wright, which is about how people come together in groups around common language.  (I’m guessing a horde of zombies would barely qualify for a “stage 1” tribe in the book, but give me a little latitude with this analogy.)

It makes sense for business leaders to understand the “tribes” that form in their organizations.  Psychologist Jonathan Haidt describes it as “hive psychology” and suggests that humans have a real need to lose themselves in a larger social organism in order to truly thrive.  “The self can be an obstacle to happiness” so sometimes it is only by immersing oneself into a group that one finds “the highest levels of human flourishing.”  Other tribal psychology research suggests that cooperation and selflessness evolved as a way to promote group selection over that of individuals in the evolutionary process.

Zombie hordes are comparable to other social networks in another way.  Just like zombiism is contagious, in Connected: The Surprising Power of Our Social Networks and How They Shape Our Lives authors Nick Christakis and James Fowler show that a variety of things can be spread through a social network including health and happiness.  Lie down with dogs and you wake up with fleas.  Lie down with zombies and you wake up with a taste for human flesh.  Who are you lying down with?

In researching this article, I found I’m not the only one to draw positive psychology lessons from zombie lore.  Annie Passanisi has written a wonderful essay on using positive psychology to defend against a mob of “fear-mongering zombies.” Passanisi has developed a whole website (http://www.imcontagious.com/) on the viral nature of social networks, where she promotes the spread of ease, rather than disease.

Look around.  The people around you may have a greater effect on you than you think.  If you really want to change the world, you will have to think about how you can use the power of the hive (i.e. the power of a zombie horde) and immerse yourself in a group that shares your vision for a brighter future.  Just like the zombie, individually, there is only so much you can do.  But when one turns into ten and ten turns into 100, there is almost nothing you can’t accomplish.

Christakis, N. A. & Fowler, J. H. (2011). Connected: The Surprising Power of Our Social Networks and How They Shape Our Lives — How Your Friends’ Friends’ Friends Affect Everything You Feel, Think, and Do. Back Bay Books.

The Positive Psychology of Zombies: The Power of Perseverance
You Don’t Stop Playing Because You Get Old