By Jeremy McCarthy on December 20, 2011 in Facts of Life, Making a Better World 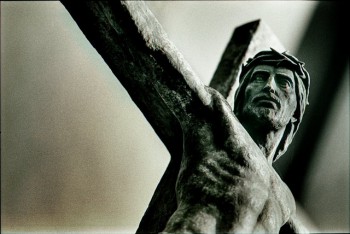 Christmas Day, December 25, is the largest holiday in the world, observed by billions of people.  For many, this is a religious holiday, celebrating the miraculous birth of Jesus Christ, the son of God.  But the holiday has transcended religion, becoming a cultural holiday marked by the exchange of gifts and secular icons such as Santa Claus, Frosty the Snowman, or Rudolph the Red Nosed Reindeer.

Often, these two camps become divided at Christmas time.  Christians bemoan the commercialization of their largest spiritual holiday, and rail against those who attempt to “x” out the Christ from Christmas (as in “Xmas”.)  For the secular crowd, there are sensitivities around the infusing of religious themes into what they perceive as a cultural holiday.  And for practitioners of other religions, they may feel that their traditions are lost in the all consuming focus on Christmas for the month of December.

This is the challenge with religions — while attempting to unify people around shared beliefs, they tend to distinguish themselves from one another, setting people apart based on where the beliefs differ.  To skirt this controversy and avoid offense, people are cautious to make reference to Christmas with people they don’t know, preferring the more neutral “Happy Holidays” as a standard holiday greeting.  (And still we manage to offend.  As blogger Penelope Trunk says: “We are annoyed when you say ‘Happy Holidays’ because we know it means ‘Merry Christmas to those of you who don’t celebrate it.’” )

The problem with this dichotomy around how we celebrate Christmas is that it distracts us from an incredible opportunity to align and unite around shared values that are more universal.   One way to do this would be to spend some time this holiday season thinking of Jesus Christ, the man.

Beliefs about divinity notwithstanding, Jesus Christ is probably the most influential man to ever walk the face of the planet.  And while Christians and Jews today squabble over the celebration of rituals of Hanukah versus Christmas, Christ was himself Jewish, and would likely not have subscribed to such petty labels and disputes.

Jesus, the man, was a teacher and a preacher of universal love and acceptance for all humanity.  Jesus was a paragon of forgiveness and mercy who always sought peace, even with those who transgressed against him in the most heinous of ways.

Tony Equale, a former Roman Catholic preist and a thought provoking author and blogger on religion, explains that during his lifetime, Jesus never claimed to be the “Messiah” or the son of God.  Like Buddha, Jesus was merely teaching the right way to live, not for the sake of some reward in the afterlife, but because it was the right thing to do.

Who was Jesus?  Tony Equale answers the question this way:

Jesus was a human being.  What was “divine” about him, metaphorically speaking, was the superlative development of the same humanity that each of us was born with.  Jesus was not only a human being, he was a great human being … and by “great” I am not referring to the notoriety, popularity or influence he achieved.  I mean he was a compassionate, loving, and courageous visionary whose simple wisdom, captured in his words and way-of-life, has inspired people for thousands of years to cherish their humanity and care for one another.

To celebrate Christmas, you don’t have to believe in heaven or hell, virgin births, or the personification of God on Earth.  But I do suggest celebrating the memory and spirit of a man whose life embodied love, kindness, and virtue and whose story gives me hope that humankind may someday find the strength to live together peacefully.  With that in mind, I wish you all a very merry and heartfelt Christmas.

The Word on Wellness
The Psychology of Wellbeing Blog Honor Roll

7 Responses to On Jesus Christ, the Man